Here’s an explosive update on those nasty foreign levy lawsuits that nobody wants to talk about.

Bill Richert, the screenwriter who is leading a class action lawsuit against the Writers Guid of America, has written to object that I called him a "loose cannon" in a previous post, where I also said he recorded a whistleblower on the phone, unaware.

I can’t honestly retract the loose cannon charge. But for the record, Richert denies having recorded whistleblower Terri Mial without her knowledge on the phone. He does acknowledge being contacted by the LAPD regarding her complaint about it.

Beyond that, Richert is angry, and justifiably so.

For five years he has been leading the lawsuit seeking millions of dollars in unpaid foreign levies and residuals from his guild to writers and their heirs.

It is one of three class action suits against Hollywood’s three major guilds, the writers, directors and actors, none one of which has been resolved. (The DGA was settled in April 2008.)

None of which is talked about in town.

The heart of creative Hollywood — the members of these guilds — ought to be in a state of permanent agitation about this lack of payment, and lack of transparency in their guilds. 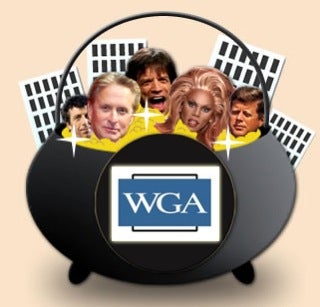 Waxword wrote last fall about $25 million in unpaid residuals sitting idle at SAG;. That one post was enough to get the guild to launch a campaign to find the people that two weeks earlier had said could not be found (Michael Douglas? Charlton Heston?).

But if you’re curious why it’s been near impossible to get any traction in the media on these lawsuits, I’ll tell you the simple truth. They are incredibly complicated issues made more so by infighting among the whistleblowers, plaintiffs and their lawyers.

But I’m diving in again.

I’ve obtained for the first time the full deposition of whistleblower Mial from 2006 in which she describes very dubious behavior at the guild: being instructed not to send out thousands of checks that came in to the guild for writers as residual and foreign levy payments.

I will post the full transcript in a bit, but here are the explosive nuggets:

Mial: They were sending me batches of checks this high with only a name. No social. No nothing. I didn’t know who to send it to.

Neville Johnson (Richert’s attorney): You indicated about a foot worth of checks?

Johnson: How often would you get stacks of checks like that?

Mial: Often. …They would just come in big stacks.

Johnson: What did you do with them?

Mial: For those members that were deceased and I had files for them, I placed them in a file until I could finalize the paperwork. For those that I had no idea what to do with, they just sat.

She asked Rod Aguirre, the director of residuals, what to do with the checks.

She was told, she said, that residuals for deceased members was not “a priority because …they do not generate dues.”

“There were some that were just totally blatant, like John Huston, whose daughter was Angelica Huston. I called Screen Actors Guild and got Angelica’s number…. But on most of the files that had been sitting there just dormant for years, nothing had been done.”

She describes the guild eventually putting those checks in a trust account, on which the guild earned interest. Mial was told that at one time the account held $23 million. (I have queried the guild as to how much is now in that account, and am awaiting a response. Update: A guild spokesman declined to say how much was in the account, and said the union does not comment on pending litigation.)

Mial also nailed the guild for lying to the press too; Sturges, she said had one check of $5,000. And instead she cites guild counsel Marshall Goldberg telling the press that Sturges was owed just $200. (I am looking for the reference in Variety, but have not yet found it.)

And she named top guild executives as involved in abetting the process: John McClane, Chuck Slocum and CFO Don Gor.

Mial: The monies would get paid out

Johnson: If you found the payee?

Mial: And if and when the chief financial officer chose to pay it.

Johnson: That would be who? Don Gor?

PREVIOUSLY: Does SAG Have Your Money? $25 Million in Unclaimed Cash

Update: The DGA writes to note that their lawsuit, led by William Webb, was settled in April 2008, and attaches the press release which reads in part:

"To date, the foreign levies program has resulted in the distribution of approximately $48 million in levies attributable to DGA members, and more than $4.9 million paid to over 2,000 directors who are not DGA members. Under the terms of the agreement settling the lawsuit, the DGA has agreed to have an outside accounting firm conduct an independent review of its foreign levies program, will provide a registration function on its website (www.dga.org), and will also make information regarding unpaid levies available on its website."