The Yankees are coming… to "How I Met Your Mother."

Actually, just one member of New York’s evil world championship team is coming to CBS’s hit Monday comedy. And that would be switch-hitter Nick Swisher. 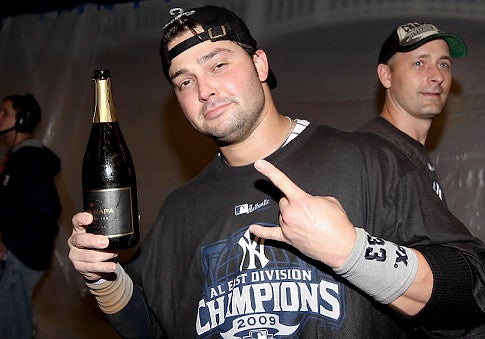 Swisher has been cast as himself on an upcoming episode of "HIMYM." The plot: When Swisher drops by MacLaren’s bar, the women all swoon– putting a major crimp in bachelor Barney’s game.

Looks like somebody’s about to get schooled in the Bro Code.

Production on Swisher’s episode — dubbed "The Perfect Week"– begins Dec. 16. The episode is tentatively scheduled to air Feb. 1. Unless, of course, CBS wisens up and decides to pair this episode of "HIMYM" with "The Big Bang Theory" and airs them both after the Super Bowl.

This isn’t Swisher’s first TV appearance. He played himself in a 2007 episode of the CW sitcom "The Game."

Swisher might not have to stretch much to play a lady magnet. The NY Daily News reported last month that Swisher, who’s been linked to "Gossip Girl" star Joanna Garcia, gets lots of attention from the hotties when visiting Yankee hangout Souther Hospitality.