Between helping to birth goats, terrorizing Tilda Swinton and cosplaying as a female Toad from the Super Mario games, Ezra Miller has quickly become one of Hollywood’s most fascinating fashion icons and movie stars.

His latest outfit, which he wore on the red carpet to the premiere of “Fantastic Beasts: The Crimes of Grindelwald” in Paris Thursday, basically said, “I see you Lady Gaga and Bjork, and I raise you this.”

Is it an alien larvae? Is it a chic, goth, “sassy sleeping bag?” Some kind of flotation device? Did the Michelin Man design it? 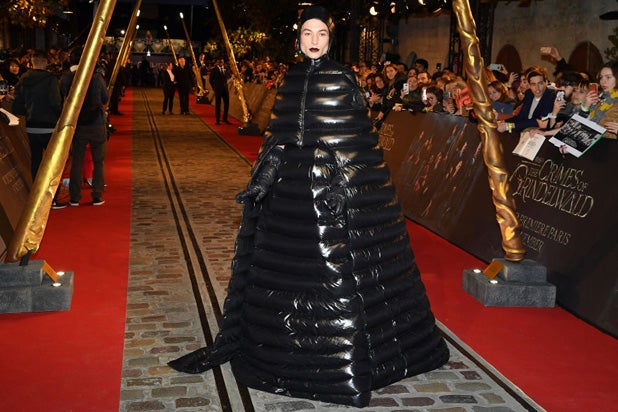 Quite literally, Miller’s outfit was a winter coat-inspired Moncler collaboration with Valentino creative director Pierpaolo Piccioli. So you know it costs more than something from REI.

Of course, social media users had a lot of fun describing whatever it was, from saying that Lizzie McGuire wore it best first to presuming that he’ll one day transform into a beautiful butterfly.

“Ezra Miller is my spirit animal,” one person wrote on Twitter. “ONLY Ezra Miller could wear this and still be hot,” another chimed in. Yes, I’m sure he was hot wearing that.

See some of the online reaction below:

Ezra Miller is going to turn into a beautiful butterfly ???????? #FantasticBeasts pic.twitter.com/m1P1FBCAgM

#EzraMiller on the red carpet for #FantasticBeasts but dressed to survive the Titanic premiere pic.twitter.com/8wwk1EnMTF

Ezra Miller at the premiere for Fantastic Beasts: The Crimes of Grindelwald. You’re welcome. pic.twitter.com/D3eD8Tg75c

Ezra Miller welcomes you to the world premiere of #FantasticBeasts⁠ ⁠: The Crimes of Grindelwald in Paris, France ✨ Here’s all the magic from the red carpet (thread): pic.twitter.com/kdrE7xiGHE

i can’t believe he’s dressed as a garbage bag for the fantastic beasts premiere ????????????lmao pic.twitter.com/RQoSFAYoSR

Do we even deserve Ezra Miller? pic.twitter.com/9ndsMh13Ro

ONLY ezra miller could wear this and STILL be hot pic.twitter.com/EniAMNfFNj

“Fantastic Beasts: The Crimes of Grindelwald” opens in theaters Nov. 16.

Prince's Fashion: 23 Most Outrageous Outfits Through the Years (Photos)

Here are just a few of Prince’s most breathtaking looks

On the fourth anniversary of Prince's death, TheWrap looks back at some of the late pop star's fashion highlights.