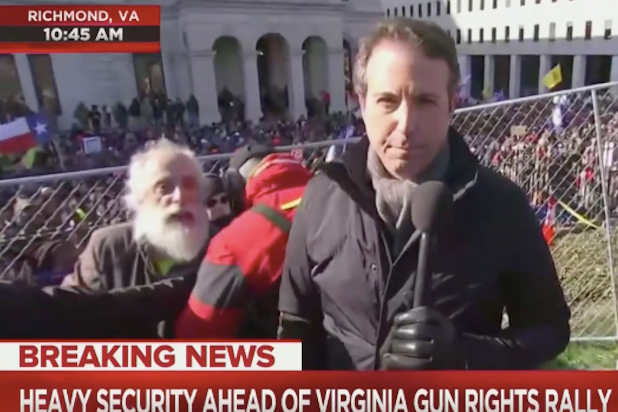 A live shot for MSNBC reporter Gabe Gutierrez on Monday went sideways when a heckler started blasting him with obscenities at a gun rights rally in Richmond, Virginia.

“Y’all a bunch of f—ing liars, you lying pieces of s—… f— you!” a bearded man, resembling a skinny mall Santa, yelled in the background as Gutierrez signed off.

The Washington Examiner grabbed a look at the brief interruption, which you can check out below:

Thousands are expected to turn out on Monday for an annual gun rights rally in Virginia’s capitol that carries more weight than usual this year, with the state legislature proposing several gun control measures. The event typically draws hundreds of attendees each year, according to NBC News.

President Trump appeared to be keeping an eye on the rally on Monday, tweeting: “The Democrat Party in the Great Commonwealth of Virginia are working hard to take away your 2nd Amendment rights. This is just the beginning. Don’t let it happen, VOTE REPUBLICAN in 2020!”

The Democrat Party in the Great Commonwealth of Virginia are working hard to take away your 2nd Amendment rights. This is just the beginning. Don’t let it happen, VOTE REPUBLICAN in 2020!

Attendees recited the Second Amendment together at the event, while some walked around carrying firearms and wearing “Guns Save Lives” stickers, according to Fox News.