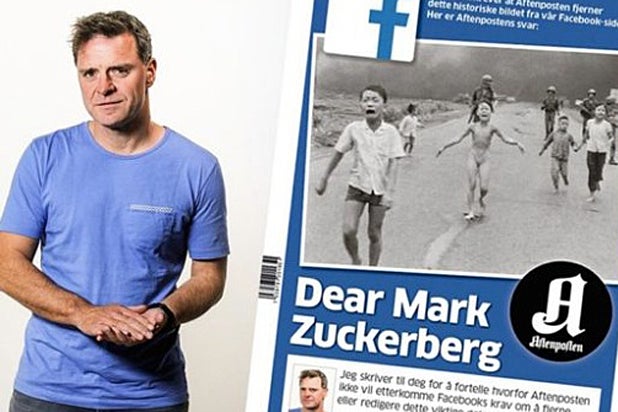 Facebook reversed its ban of an iconic image from the Vietnam War depicting a girl fleeing a Napalm attack after the censorship sparked outrage.

The Pulitzer Prize-winning photo taken in 1972 had been posted by a Norwegian author, but the social media empire removed the image claiming it violated their nudity policy because the girl was naked.

However, when Norwegian daily Aftenposten lashed out at Facebook Chief Executive Mark Zuckerberg for “limiting freedom,” the standoff caught global attention — and even led to harsh comments from Norway’s prime minister, the Wall Street Journal reported.

“Facebook gets it wrong when they censor such images,” Prime Minister Erna Solberg wrote on her own Facebook page. “I say no to this type of censorship.”

“I want my children and other children to grow up in a society where history is taught as it was. Where they can learn from historical events and mistakes,” Solberg added. “Today, pictures are such an important element in making an impression, that if you edit past events or people, you change history and you change reality.”

Zuckerberg’s company has since backed down and allowed the publication of the controversial photo, along with a statement Friday explaining why it backtracked.

Facebook also said it will review the process that judges what is appropriate and what isn’t, especially in reference to images of historical standing.

“Because of its status as an iconic image of historical importance, the value of permitting sharing outweighs the value of protecting the community by removal, so we have decided to reinstate the image on Facebook where we are aware it has been removed,” the statement continued.

The news was well-received by both Solberg and the original author Tom Egeland, whose account had been suspended.