Teens can run from Facebook, but they can’t hide.

The social network has bought tbh, an app wildly popular with Gen Z’ers that specializes in positive anonymous feedback, the startup announced on its blog on Monday.

Tbh — which stands for “to be honest” — lets users answer innocuous poll questions about their friends, like “who do you trust to sink a 3-point shot?,” or who “should DJ every party.”

The app has been a hit since launching in August, hovering near the top of the free iOS apps for weeks; it’s been downloaded more than 5 million times and had more than 1 billion poll questions answered in that time, according to the company’s blog.

“When we met with Facebook, we realized that we shared many of the same core values about connecting people through positive interactions,” said tbh in a blog post on FB’s acquisition. “Most of all, we were compelled by the ways they could help us realize tbh’s vision and bring it to more people.” 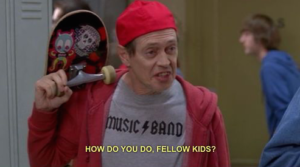 Terms of the deal were not disclosed, but TechCrunch reported the deal is worth less than $100 million. The app will continue to operate on its own, similar to other FB-owned apps such as Instagram and WhatsApp. But tbh’s four co-creators, Nikita Bier Erik Hazzard, Kyle Zaragoza and Nicolas Ducdodon, will work out of Facebook’s Silicon Valley headquarters.

Bringing tbh into the fold spreads Facebook’s presence across the App Store even more. Four of the top six free apps on iOS were created or bought by Mark Zuckerberg: tbh, Messenger, Instagram and Facebook itself.

One reason tbh was so attractive to Facebook? It’s popular with a demographic where the social network is lagging right now.

A Piper Jaffray research survey last week highlighted Facebook’s lack of “cool factor” with kids, with nearly half (47 percent) of the 4,100 teens polled saying Snapchat is their preferred social media platform. That was a  massive lead on both Instagram (24 percent) and Facebook (9 percent).