Facebook VP Nick Clegg defended the company’s decision to suspend former President Donald Trump from its platform during a Sunday interview with ABC News. Clegg said the social network took action against Trump because his posts encouraged violence, not because they shared lies.

“I don’t think anybody wants a private company like FaceBook to be vetting everything that people say on social media for its precise accuracy and then booting people off the platform if what they say is inaccurate,” Clegg said.

His answer came in response to ABC’s George Stephanopoulos asking whether Trump — if he were still on Facebook — would’ve been penalized by the company for saying the 2020 election was rigged, as he repeated during a speech this weekend. 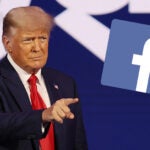 “So the bright red line there is encouraging violence, not spreading lies?” Stephanopoulos asked afterwards.

“Yeah,” Clegg said. “We’ve got very clear rules, they’re called community standards. Everyone can go online to see them, and one of the brightest of those red lines, as you just implied, is that you cannot — it doesn’t matter who you are, you could be the Pope, the Queen of England, the President of the United States — you cannot use our services, and I hope most people would think this is reasonable, to aid, abet, foment, or praise acts of violence.”

Facebook hit Trump with an indefinite suspension on January 7, one day after hundreds of his supporters stormed the U.S. Capitol. At the time, Facebook CEO Mark Zuckerberg said Trump was booted for using the platform “to incite violent insurrection against a democratically elected government.” The risk of leaving him on Facebook, Zuckerberg added, was “simply too great.”

Leading up to the Capitol Riot, Trump posted several times on Facebook about the election being “rigged,” in his words. On January 5, he posted he would be speaking at the “Save America March,” and later added a followup post saying, “SEE YOU TOMORROW, THANK YOU!”

His last post on Facebook on January 6 said: “I am asking for everyone at the U.S. Capitol to remain peaceful. No violence! Remember, WE are the Party of Law & Order – respect the Law and our great men and women in Blue. Thank you!”

Clegg’s Sunday interview came after Facebook announced on Friday it was suspending Trump for at least two years. Trump’s suspension is set to lift on Jan. 7, 2023 — exactly two years after he was kicked off the platform — but Clegg said his return is also dependent on good behavior, essentially.

On Friday, Clegg said Facebook will “look to experts to assess whether the risk to public safety has receded” by the time Trump’s suspension is set to be lifted. The company will also evaluate several “external factors,” Clegg said, “including instances of violence, restrictions on peaceful assembly and other markers of civil unrest,” when making its decision.

Trump’s suspension also applies to Instagram, which Facebook owns. Trump had a combined 56 million followers across the two platforms at the time he was banned.

And when Trump is given the green light to return to Facebook, Clegg said there will be a “strict set of rapidly escalating sanctions that will be triggered if Mr. Trump commits further violations in [the] future, up to and including permanent removal of his pages and accounts.”