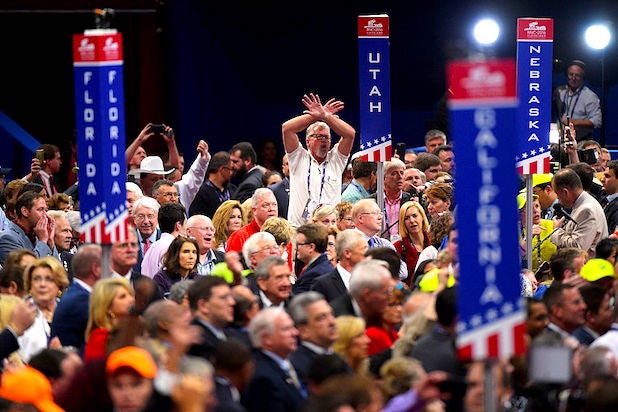 Facebook Live played a major role in the 2016 Republican and Democratic conventions, with 8,500 hours’ worth of streaming video, the equivalent of almost 356 straight days of content between the two events.

The nonstop supply of video has been viewed over 120 million times, aided by special Facebook Live lounges at both conventions. It’s not quite the Chewbacca Mom’s 160 million views, but it’s not too shabby. To put things in perspective, Fox News was the most-watched television network during Donald Trump’s acceptance speech with 9.35 million viewers.

The Republican and Democratic conventions, however, offered the streaming app a chance to rack up views without the element of tragedy. Here’s a sampling:

Katie Couric offered a behind-the-scenes look at the RNC.

Triumph the Insult Dog was up to his usual antics.

Meanwhile, Univision’s Jorge Ramos reported live from the floor of the RNC, Trevor Noah provided real-time reaction to Donald Trump’s acceptance speech, Samantha Bee was interviewed live by both The New York Times and the Washington Post and even Glamour streamed live from the Democratic Convention for a conversation with Chelsea Clinton, Lena Dunham and America Ferrera.

Stephen Colbert took things to a new level, with videos on Democratic Convention recycling, cameras dedicated to condiments, a blind date between Hillary Clinton and Bernie Sanders supporters, a cold hamburger and even a tip jar.

ABC News and Facebook Live partnered up for gavel-to-gavel coverage of the conventions, which did massive numbers, including 28 million video views and 74 hours of programming. The partnership yielded 96 individual Facebook Live streams during the two conventions combined.

ABC News isn’t the only organization racking up views on Facebook Live. PBS NewsHour’s video of Michelle Obama’s speech already has over 4 million views and 127,000 likes.

Last week, Facebook reported revenue of $6.4 billion and earnings of 97 cents a share. That easily beat its performance for the same period last year, when Facebook brought in slightly more than $4 billion in revenue and had earnings of 50 cents a share. Many believe the Live product is responsible for that growth.

“Our community and business had another good quarter,” Facebook CEO Mark Zuckerberg said in the earnings release. “We’re particularly pleased with our progress in video as we move towards a world where video is at the heart of all our services.”