Facebook has a “D.C. problem,” says everybody: the Washington, D.C.-based news sites and pundits, Axios and Politico and Rachel Maddow.

Everybody’s up in arms that Facebook took months to disclose that it received $100,000 in political ads from Russian fronts during the 2016 election. Facebook finally fessed up to this fact in September — eight months after having denied it.

CEO Mark Zuckerberg last week rushed to offer an empathetic video in which he confessed that “for a while we had found no evidence of fake accounts linked to Russia running ads” but the platform suddenly found 3,000 fake ads that have since been handed over to Congress.

And the site is planning to “to make political advertising more transparent,” in Zuckerberg’s words.

Also Read: Facebook to Turn Over 3,000 Russia-Bought Ads to Congress

I’m starting to have a real problem with this. Mark Zuckerberg and Sheryl Sandberg are nice and all, and built a behemoth monopoly over our time and Madison Avenue’s ad dollars with us barely noticing how they dominate our news feed and now our elections.

It’s not even clear that Facebook has noticed this.

Like Google and Amazon, Facebook has become a monopoly, with its 2 billion monthly users. To understand the scale of this power, the sheer, stunning breadth of this platform, pay attention to this paragraph from John Lanchester in the London Review of Books:

“Facebook’s biggest rival for logged-in users is YouTube, owned by its deadly rival Alphabet (the company formerly known as Google), in second place with 1.5 billion monthly users. Three of the next four biggest apps, or services, or whatever one wants to call them, are WhatsApp, Messenger and Instagram, with 1.2 billion, 1.2 billion, and 700 million users respectively (the Chinese app WeChat is the other one, with 889 million). Those three entities have something in common: they are all owned by Facebook. No wonder the company is the fifth most valuable in the world, with a market capitalisation of $445 billion.”

Monopolies are something that democracies and capitalist societies have long deemed problematic. But they are a sought-after end in Silicon Valley, as tech billionaire and journalism-slayer Peter Thiel says in his book, “Zero to One: Notes on Startups, or How to Build the Future.” He thinks they’re what’s needed in a technologically innovative society.

I happen to think monopolies are dangerous in a democracy because they allow for a concentration of power — however benign and initially well-meaning — in which lack of accountability leads to abuses and arrogance.

Facebook is in the midst of that right now.

News publishers are among the most important victims of the monopoly Facebook has created. Free and fair elections may well be the next.

In a powerfully incisive analysis of how traditional publishers have crumbled before the power of Facebook and Google called “How to Boil a Frog,” media analyst Kunal Gupta observes how clueless publishers have been party to Facebook slowly but surely taking all their business. 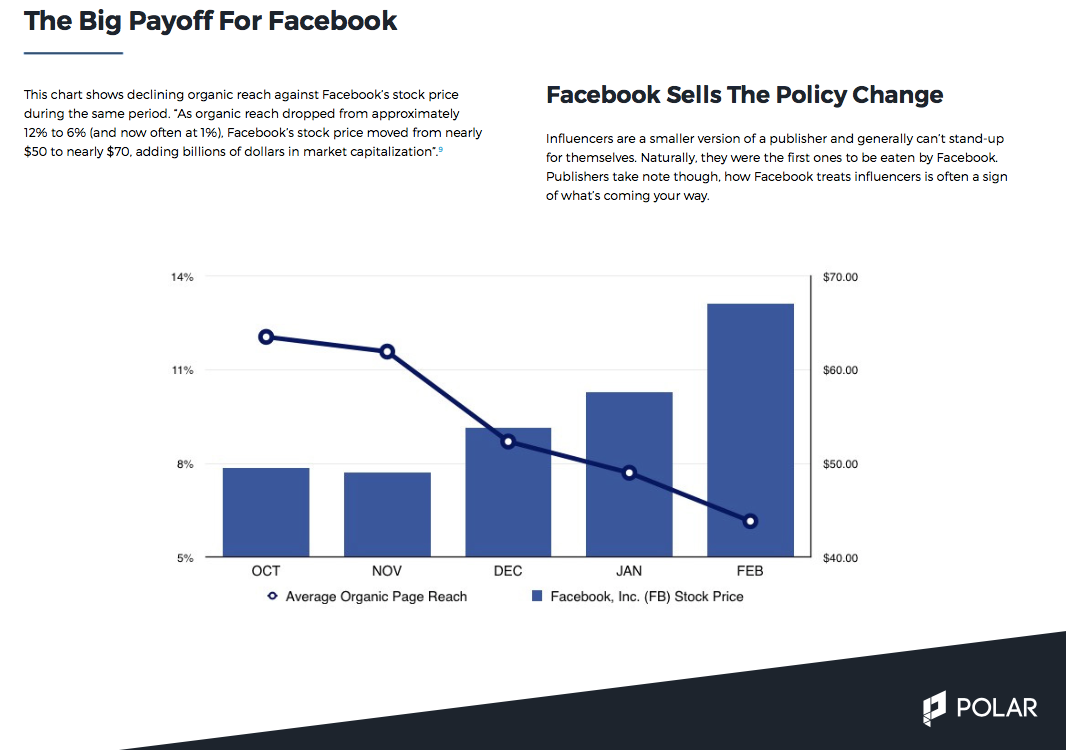 From ‘How to Boil a Frog’ by Polar

“The troubling insight from my own research is that Facebook has a repeated pattern of inviting you in by providing a benefit, and then once you are hooked, turning up the heat at the next thing you know, you’re being served as the next course,” he wrote.

“Publishers have been motivated by short-term outcomes such as growing referral traffic, monthly uniques and delivering more audience to high-valued branded content destinations. Facebook, on the other hand, is guided by a long-term vision, where they control and influence who gets access to their audience. “

What does this have to do with Russia hacking the election? Facebook’s massive influence is the commonality, along with the lack of accountability from the havoc that has resulted.

After encouraging publishers to move all their readers to Facebook, Facebook essentially takes all the ad revenue driven by content creators. Their attitude seems to be: Wait, what did we do?

Also Read: Facebook Is in the Hot Seat From Both Dems and GOP on Russian Ads

Similarly, Facebook has shirked its responsibility for vastly altering the political landscape. The polarization that has beset the U.S. electorate is a result, at least partially, of the algorithmic approach to feeding people stuff they seem to want and reinforcing their existing beliefs. Wait, Facebook says, did we do something? The company really wants you to know that its intentions were super good.

I can’t say with confidence that Facebook is a cynical company that has set out to undermine legitimate news publishers by powering the proliferation of fake news. But I can say that it has done very little to own the fact that it has allowed this to happen.

All of my sources knowledgeable about doings at Facebook suggest that there’s been a deliberate head-in-the-sand approach to recent events. The company’s value has exploded on Wall Street. It has insistently wanted to be a tech company and washed its hands of any responsibility for the content on its platform.

That time now comes to an end.

Like other media and entertainment giants — including broadcasters that have to hew to standards at the FCC to be granted their licenses — Facebook is in fact a content provider. It is the biggest content provider in the world, with the exception of Google.

And now Congress is paying attention.

Democratic senators Amy Klobuchar (Minn.) and Mark Warner (Va.) have circulated a “Dear Colleague letter,” obtained by Axios, seeking co-sponsors for legislation that “would formalize, and expand, the transparency commitments Facebook has made.”

Conservatives are even more upset even though it was Hillary Clinton who paid the price for those fake news ads. “Conservatives in Washington and around the country, famous for pushing back on government, plan to be increasingly vocal in arguing that self-regulation isn’t working with the tech giants,” Axios’ Mike Allen wrote last week. 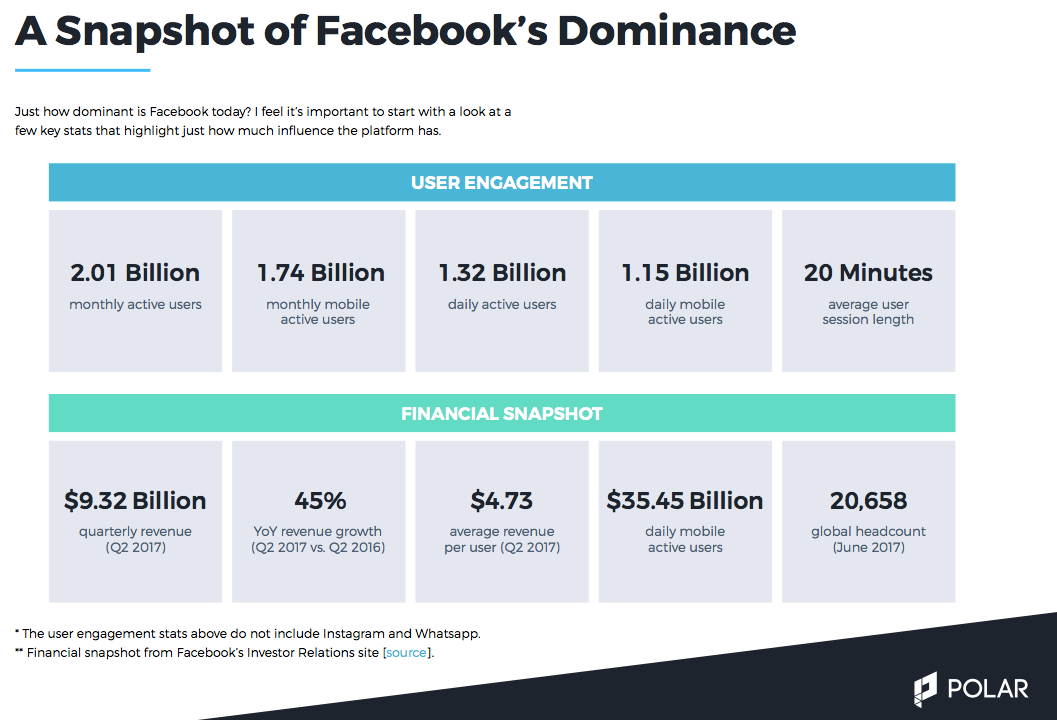 source: How to Boil a Frog, by Polar

“For all the corporate uplift of its mission statement, Facebook is a company whose essential premise is misanthropic. It is perhaps for that reason that Facebook, more than any other company of its size, has a thread of malignity running through its story….

… In the open air, fake news can be debated and exposed; on Facebook, if you aren’t a member of the community being served the lies, you’re quite likely never to know that they are in circulation. It’s crucial to this that Facebook has no financial interest in telling the truth. No company better exemplifies the internet-age dictum that if the product is free, you are the product. Facebook’s customers aren’t the people who are on the site: its customers are the advertisers who use its network and who relish its ability to direct ads to receptive audiences.”