Facebook is getting a facelift, with CEO Mark Zuckerberg unveiling an app and website redesign on Tuesday at the company’s annual F8 developer conference in San Jose, California.

The redesign aims to drive a better sense of “community,” Zuckerberg said, while also focusing on improved “private interactions.” The new Facebook is the “sum of hundreds” of small changes, according to Zuckerberg, but it sports one conspicuous difference: the company’s trademark blue color scheme has been replaced with much more white space.

The change was noticeable in the example displayed behind Zuckerberg as he spoke: 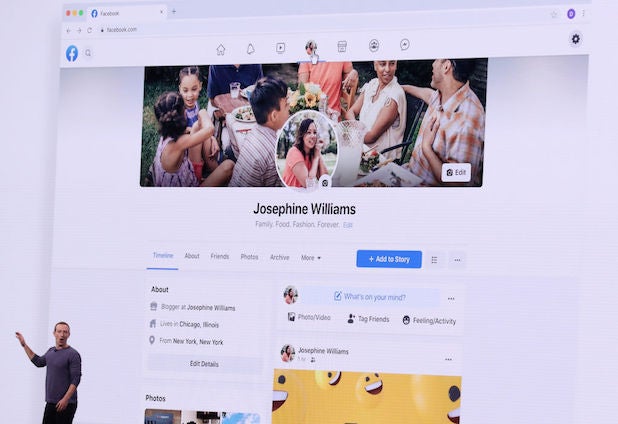 Mark Zuckerberg shows off the new-look Facebook (via Getty Images)

“This is the biggest change to the Facebook app and website that we’ve made in the last five years,” Zuckerberg said.

The redesign’s biggest change places a greater emphasis on groups and makes it easier to directly share to groups from the homepage. “Groups are now at the heart of the experience, just as much as your friends and family,” he explained. The group’s icon is literally at the heart of the app redesign, with its icon prominently featured alongside Facebook Watch, its video hub, at the top of the app and desktop menu. Facebook will also recommend groups for users to join as part of its update.

The change comes as Facebook continues to shift its focus away from News Feed, its stream of user posts and pictures, and towards more personal forms of communication. Last week, the company celebrated Stories, its ephemeral pictures and videos sharing feature, for passing the 500 million daily users threshold. Zuckerberg reiterated its importance on Tuesday, saying “we expect the amount of Stories that are shared to outnumber the amount of Feed posts that are shared” in 2019.

The update was revealed only a month after Zuckerberg said Facebook would embrace a “privacy first” mantra that included end-to-end encrypted messaging across all of its platforms. The redesign “will end up creating a more trustworthy platform,” Zuckerberg told The New York Times. Facebook has been heavily criticized in the last year over its handling of user data after the company admitted up to 87 million users were impacted by the Cambridge Analytica data leak.

The mobile redesign will be available to Facebook users in the U.S. immediately and will hit other markets in the coming months.