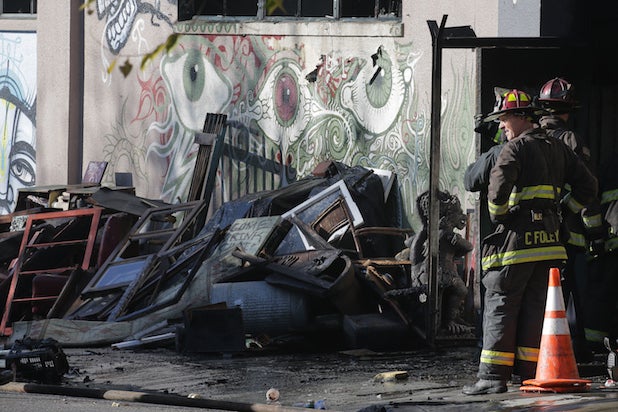 The death toll in this weekend’s Oakland warehouse fire has now risen to 30, according to the local sheriff’s office in the northern California city.

“That is an astronomical number,” Alameda County Sheriff’s Sgt. Ray Kelly said Sunday. “We’re really starting to get deeper into the building and as we do that we continue to find more victims.”

As loved ones toil and mourn, the man who allegedly lead the artist collective at the space that caught fire on Friday night wrote a Facebook post that is sparking an outpouring of ire online.

Derick Alemany, who goes by “Derick Ion” on Facebook, wrote on Saturday: “Confirmed. Everything I worked so hard for is gone. Blessed that my children and Micah were at a hotel safe and sound… it’s as if I have awoken from a dream filled with opulence and hope…. to be standing now in poverty of self worth.”

The post soon fell under harsh criticism, with many commenters pointing out that Alemany focused on mourning the loss of his material possessions rather than pay tribute to those who died in the fire.

“And you are the one who allowed this fire trap to exist and invited hundreds to endanger their lives, over and over, until the worst happened,” wrote Milena Hileman. “You were warned by the authorities two years ago and did nothing. Friends told you what a hazard it was and you laughed, each and every time. I hope you go to prison for these senseless deaths.”

“Wow…all your ‘stuff’ is gone…scores of dead people and you’re f—ing worried about stuff?!! What a f—ing a–hole,” wrote Brad Trent, echoing the thoughts of the majority of people who responded to the post and who are also expressing horror over Alemany’s insensitive comments on other social media sites.

Here are a few other comments:

Chor N Ng, owner of #oaklandfire warehouse, owns more than 24 buildings in Bay area. He & #derickion are getting skewered by public opinion https://t.co/B2PhwejWnv

This is what #DerickIon is responsible for…and that's only the ones "easily" found. Hope he has a really good attorney. #oaklandfire pic.twitter.com/j0nVb8ekKJ

Ion did not immediately respond when TheWrap reached out to him on Sunday.