Facebook continues to grow, with the social network reporting on Wednesday afternoon its monthly user base increased 10% year-over-year to 2.6 billion users overall during the first quarter. At the same time, Facebook edged past Wall Street’s revenue projections, but the company warned its business faces a rocky road ahead, due to the coronavirus pandemic.

The company said it expects to face coronavirus-related challenges to its business as the year unfolds.

“Our business has been impacted by the COVID-19 pandemic and, like all companies, we are facing a period of unprecedented uncertainty in our business outlook,” Facebook said in its letter to shareholders.

“We expect our business performance will be impacted by issues beyond our control, including the duration and efficacy of shelter-in-place orders, the effectiveness of economic stimuli around the world, and the fluctuations of currencies relative to the U.S. dollar.”

Facebook’s Q1 report comes out a day after Alphabet, the parent company of Google, said it experienced a “significant slowdown in ad revenues” due to COVID-19. (Alphabet still brought in more than $41 billion in Q1 sales, topping analyst projections.) Wall Street analysts have been anxious to see how the two tech giants, both largely dependent on ad sales, would perform, considering the pandemic’s impact on the ad market.

As mentioned above, Facebook’s DAUs hit 2.6 billion, while its monthly active users hit 1.73 billion — up 11% year-over-year. One thing that stood out from Facebook’s Q1 report: it easily posted its best domestic user growth in years, with Facebook adding 5 million daily users in the U.S. and Canada during Q1; it had added 5 million domestic DAUs in the previous 5 quarters combined heading into Q1. 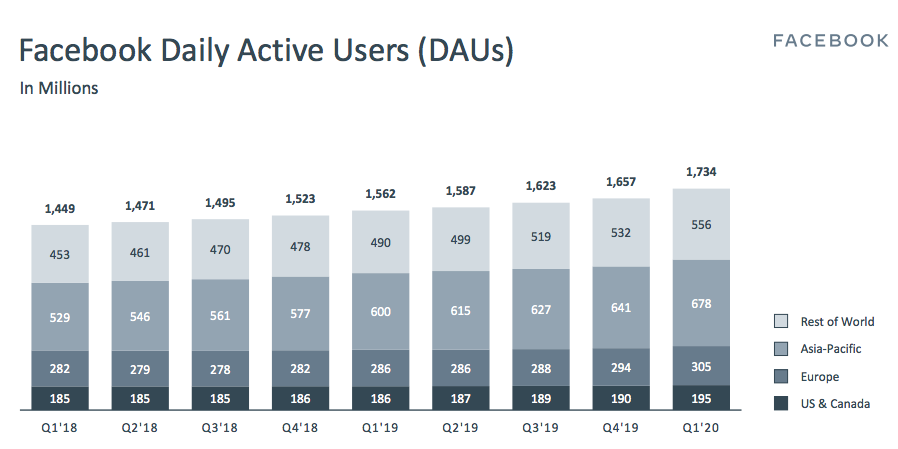 Wall Street appeared to be impressed with the company’s showing, at least at first blush, with Facebook’s stock jumping 8% in early after-hours trading to $210 per share. Facebook closed at its all-time high of $223.23 in late March.

Facebook declined to provide guidance for Q2, pointing to “significant reduction in the demand for advertising.”

Also Read: 'No Filter' Author Sarah Frier on the Unexpected Rise of Instagram and Persistent Rivalry With Facebook | Video

Like many other companies, Facebook’s stock price tanked between early and mid-March, dropping from nearly $200 per share to $146 per share, due to the coronavirus pandemic. But the social network had almost completely rebounded heading into Wednesday afternoon, with Facebook’s stock trading at $194 per share before the company released its Q1 report.

Last week, Facebook announced it was launching its own video group chat feature, allowing up to 50 friends to simultaneously speak to each other. The move was seen by many as a direct response to Zoom’s user base booming in the last two months. In other pandemic-related news, Facebook announced earlier this month it would remove posts looking to organize protests against widespread stay-at-home orders — putting the company firmly on one side of a heated debate in whether it should be censoring certain viewpoints.

CEO Mark Zuckerberg said earlier this month Facebook will not hold any “large physical events” until June 2021, effectively canceling the in-person portion of this year’s shareholder meeting. The announcement came after Facebook canceled its annual F8 developer conference, which was set for the first week of May, in February.

Facebook will hold a call at 2:00 p.m. PT to discuss its earnings.