Facebook topped Wall Street’s revenue and earnings expectations when it posted its second quarter financial report on Thursday afternoon, indicating the coronavirus pandemic, a high-profile ad boycott and lingering antitrust questions did little to curb its business. The social network’s user base also continued to swell, with Facebook adding another 100 million monthly active users during the quarter.

Facebook’s daily active users hit 1.79 billion by the end of June, while monthly active users hit 2.7 billion — up from the 2.6 billion MAUs Facebook had at the end of the first quarter. The 100 million new MAUs came in above analyst projections, which had Facebook ending Q2 around 2.65 billion MAUs. Both Facebook’s DAUs and MAUs grew 12% from the same time last year.

The company’s stock price jumped 5% in early after-hours trading to $246.89 per share — putting the company within striking distance of hitting its all-time high of $250.15.

“We’re glad to be able to provide small businesses the tools they need to grow and be successful online during these challenging times,” Facebook CEO Mark Zuckerberg said in a statement. “And we’re proud that people can rely on our services to stay connected when they can’t always be together in person.”

Facebook’s user growth stemmed mostly from its “Asia-Pacific” and “Rest of World” markets, although there was modest growth both in the U.S. and Europe as well. 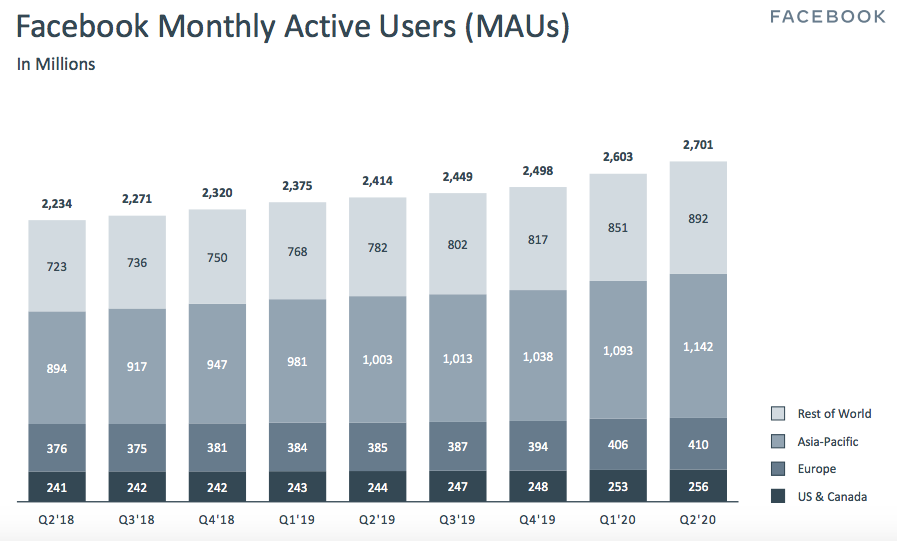 In its earnings release, Facebook said its business faces “a period of unprecedented uncertainty” due to COVID-19. “We expect our business performance will be impacted by issues beyond our control, including the duration and efficacy of shelter-in-place orders, the effectiveness of economic stimuli around the world, and the fluctuations of currencies relative to the U.S. dollar.”

Facebook initially planned to release its Q2 report on Wednesday, but the company postponed the release for a day because of Mark Zuckerberg’s testimony before Congress, alongside the CEOs of Apple, Amazon and Alphabet, Google’s parent company. Zuckerberg was pressed at the hearing, which nominally focused on potential antitrust issues, on the company’s 2012 acquisition of Instagram; Zuckerberg argued Facebook did not engage in any any-competitive practices by grabbing Instagram because it wasn’t guaranteed at the time Instagram would grow into the massive platform it is today. You can read more key takeaways from the hearing here.

The second quarter was packed with Facebook news stories, as usual. Early in Q2, Facebook announced it wouldn’t host any physical events with 50 or more people until June 2021 at the earliest, due to the coronavirus pandemic. The company usually hosts its annual F8 developer conference in May, but this year’s event was scrapped, along with next year’s as well.

Most notably during Q2, though, Facebook was hit with an ad boycott spearheaded by a number of civil rights organizations, including the Anti-Defamation League and the NAACP. The groups accused Zuckerberg of allowing extremists to promote violence, thanks to Facebook’s hands-off moderation policies in comparison to other tech companies. Facebook was also criticized for not posting warning labels to certain posts from President Trump, like Twitter has, and was also accused of not doing enough to “protect” its Black and Jewish users from vile comments. The boycott, dubbed the “Stop Hate for Profit” campaign, quickly gained support from a number of major companies, including Honda, Levi Strauss, Pfizer and Unilever. One University of Pennsylvania professor told TheWrap the boycott marked a “new era” in “corporate activism.”

The boycott put an initial dent in Facebook’s stock price, but the company soon recovered to where it had been trading right before the groups took action. And since the boycott didn’t go into effect until July, after the second quarter had finished, it’s still unclear how it impacted Facebook’s business.