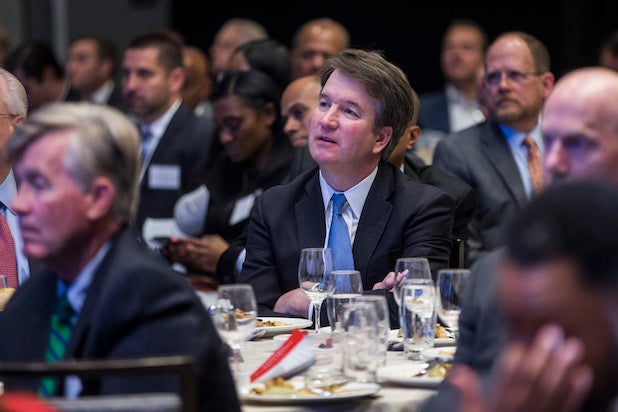 U.S. Supreme Court Justice Brett Kavanaugh at an event hosted by the Economic Club of Washington, D.C. on May 9. (Zach Gibson / Getty Images)

Last year, Joel Kaplan, Facebook’s vice president for global policy, apologized to employees after he was pictured supporting Kavanaugh during a congressional hearing in which he addressed an accusation that he sexually assaulted a woman in high school. Dozens of Facebook employees, some of whom were survivors of sexual assault, said Kaplan’s support for Kavanaugh made them uncomfortable working under Kaplan.

“Mr. Kaplan’s surprise appearance prompted anger and shock among many Facebook employees, some of whom said they took his action as a tacit show of support for Judge Kavanaugh — as if it were an endorsement from Facebook itself,” the New York Times’ Mike Isaac reported at the time.

The Federalist Society’s dinner event on Thursday, however, comes with an official sponsorship from Facebook under the society’s “Gold Circle” tier.

Facebook supports a large array of groups across the political spectrum, including the American Constitution Society and Center Forward. A company spokesperson told The Wrap that Facebook has supported the Federalist Society since at least 2013 but did not respond to inquiries on whether Facebook has sponsored events featuring Kavanaugh before. A spokesperson for the Federalist Society did not respond to a request for comment.

The sponsorship was first reported in Popular Information, a newsletter written by Judd Legum.