Investors don’t appear to be too worried about advertisers boycotting Facebook, with the social network’s stock price racing to a new all-time high on Tuesday morning.

Facebook shares hit $245.50 early on Tuesday, setting a new all-time high for the company. Shares dropped slightly afterwards, but the company was still up about 1.6% to $244.21 per share an hour into the day’s trading session; if the gains hold through the end of the day, Facebook would also eclipse its record closing high of $242.24, which it set last month. 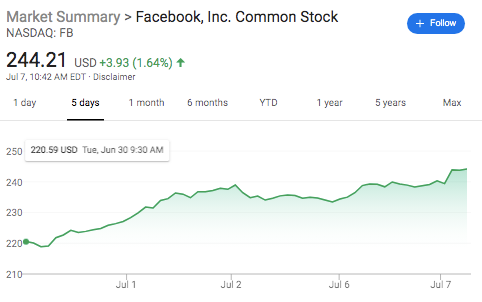 The Wall Street surge comes as Facebook grapples with an ad boycott spearheaded by several civil rights groups, including the NAACP and the Anti-Defamation League, over the company’s content moderation policies. The #StopHateForProfit campaign, as it’s been dubbed, has accused Facebook and CEO Mark Zuckerberg of allowing extremists to promote violence, thanks to Facebook’s laissez faire moderation policies in comparison to other tech companies. Facebook is also criticized for not taking action against President Trump’s recent comments,  unlike Twitter, which added a fact-check notification to a few of the president’s tweets last month. On top of that, the groups claim Facebook isn’t doing enough to “protect” its Black and Jewish users from vile comments.

The boycott, which will run through at least the end of July, includes several prominent Facebook advertisers, including Honda, Levi Strauss, Pfizer and Unilever. Other major companies like Adidas and Microsoft — Facebook’s third biggest advertiser last year — have also paused advertising on Facebook, without formally joining the #StopHateForProfit movement. Facebook has looked to address some of the campaign’s concerns in the last two weeks, and Zuckerberg plans to meet with the boycott organizers on Tuesday.

Facebook’s share price initially dipped to about $215 per share after the boycott started to pick up steam in late June, and understandably so. Facebook made $70.7 billion last year, nearly all from advertising. But investors now seem to have shrugged off the ad boycott as a temporary blip for the company. About three-quarters of Facebook’s advertising stems from small and medium-sized businesses, and there hasn’t been much indication they’re jumping ship over the company’s moderation policies.

“To be sure, the list of advertisers pulling Facebook spend (and increasingly, all social media, often including Twitter and YouTube) for the month of July is growing. However, with Facebook sporting 8 million+ advertisers and many direct response advertisers willing to spend more in ad auctions when others step away, we don’t expect the revenue impact to be material at this stage,” BMO analyst Daniel Salmon told clients in a recent note.