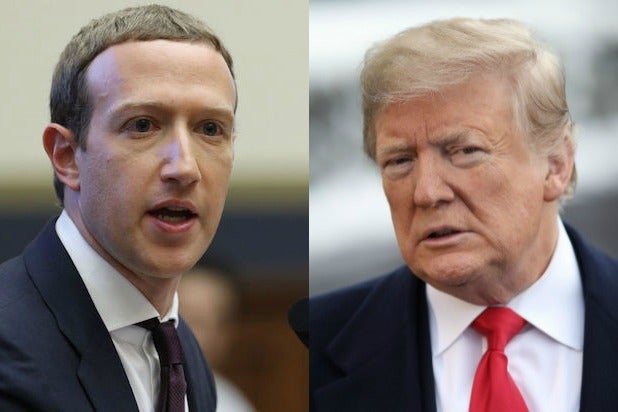 Facebook chief Mark Zuckerberg pushed back against criticism of Facebook’s relationship with President Trump, saying the tech giant doesn’t offer the White House or the commander-in-chief special benefits or extra leeway, according to a Monday interview with Axios.

“I’ve heard this speculation, too, so let me be clear: There’s no deal of any kind,” Zuckerberg said. “Actually, the whole idea of a deal is pretty ridiculous.”

Zuckerberg’s comments come as Facebook has faced increased scrutiny from many on the left over its content moderation policies; Facebook’s critics have pushed the company to be more proactive in taking down “hate speech” and other posts from the president. Last month, Facebook and Zuckerberg were ripped for not censoring one of the president’s posts, where, commenting on rioters and looters, he said that “any difficulty and we will assume control but, when the looting starts, the shooting starts.” Trump was later criticized for using the phrase because it had been used by Miami’s police chief to scare protestors during the civil rights era. Miami Police Chief Walter Headley said it in a 1967 speech, in which he claimed his officers “don’t mind being accused of police brutality” against teens and young adults he called “young hoodlums.”

In his interview with Axios, Zuckerberg reiterated he wants Facebook to take a more laissez-faire approach to moderating political content.

“In giving people a voice, even when I disagree with them. I believe in a broad definition of free expression, especially around political speech — but those are my principles and I don’t think that’s a surprise to anyone,” Zuckerberg said.

Zuckerberg also pushed back against criticism he’s had private conversations and dinners with Trump, saying he’s done the same thing when President Obama was in office.

Facebook’s critics have said the company doesn’t do enough in comparison to other tech platforms when it comes to moderating the president’s posts. Twitter, for comparison, has started adding warning labels and fact check notifications to certain Trump tweets. Still, Facebook has taken action against Trump on a few occasions recently, including pulling a Trump ad that included a red triangle, a symbol that was used in Nazi Germany to mark political prisoners in concentration camps. The Trump campaign pushed back soon after, saying the red triangle is a sign used by Antifa and that its ad was criticizing the group’s recent involvement in protests and riots.

Zuckerberg added the regulatory heat his company has faced under the Trump administration reinforces there is no sweetheart deal between the president and Facebook.

“Under this administration, we’ve faced record fines of $5 billion, are under antitrust investigation by multiple agencies, and have been targeted by an executive order to strip protections in Section 230,” a longtime law that shields tech giants from being held accountable for what it’s users post.