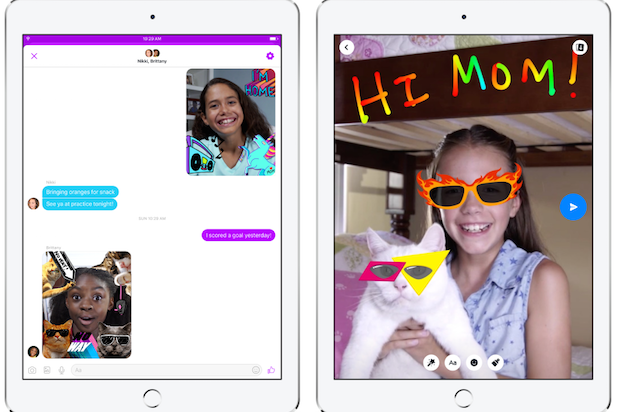 Soon enough we’ll all be texting and sending emojis from the moment we pop out of the womb.

Facebook announced on Monday it’s rolling out its own version of Messenger for youngsters — aptly titled “Messenger Kids” — to give families a “fun, safer solution” to talking online.

The app, aimed at kids 13 and under, doesn’t require children to sign up for a Facebook account. Rather, parents authorize their accounts and approve all friends that their kids have on Messenger Kids. Parents can add other family members to their child’s contacts. And if their kid wants to add their BFF Johnny from elementary school, you need to be friends with Johnny’s parents on Facebook; parents will then see a linked account and can send a friend request for their kids.

Also Read: 'Coco,' 'The Breadwinner' Are the Top Toons in Annie Awards Nominations

Facebook said it talked with the National PTA, “thousands” of parents, and “parenting experts” when crafting Messenger Kids.

Messenger Kids comes stocked with “kid-appropriate” GIFs, stickers, frames, masks and drawing tools. Video chat is also featured. And if kids run into any creeps, they can report and block them.

The app is a win-win for Facebook: It gives parents a “safe” messaging option, while at the same time pulling more people under the social network’s umbrella. It’ll also give Facebook access to messaging habits between kids and parents — something that will help it refine its business moving forward. Messenger Kids is available starting on Monday on iOS, and is rolling out to Android later in the month.