The baby-faced CEO Facebook Mark Zuckerberg gave a nervous performance on Wednesday over the status of his giant social network now under fire for its privacy policies, saying that the company was still learning and “we’re a lot closer to the beginning than the end.” 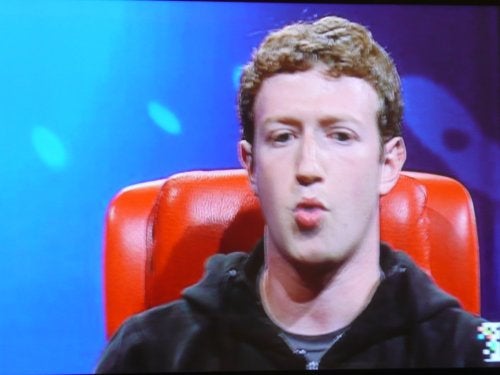 Zuckerberg, 26, now sits astride a social network monolith, with some 540 million monthly users around the world.

In a live interview at the AllThingsD conference in Palos Verdes, he stammered and sweated and often spoke in circles while discussing the issues that have drawn the attention of Congress and a growing number of angry Facebook users (some of whom staged a Quitting Facebook protest recently).

“We recommended (privacy) settings for people, we always do. And we ask that everyone go and review their settings and make a choice,” Zuckerberg began.

Some have criticized Facebook as being too open with user information, or too complicated for users to implement privacy controls.

“The big feedback I got was that privacy settings were too complex,” said Zuckerberg. “We built one main setting for everyone to use.”

But as the interview by AllThingsD’s Kara Swisher and Walt Mossberg continued, he grew increasingly nervous. At one point, Swisher suggested Zuckerberg take off his hoodie, which he did – but even so, continued to sweat.

“We continue to do what we think are the right changes, even if they are controversial, and it’s what we think people are counting on us to do as the leaders in the space,” he said.

Mossberg suggested that some users might feel that: “You seem to have taken steps to make more public my information as a Facebook member on your own … why is the management of the company saying they’re gonna take this information and do something with it?”

Swisher chimed in, asking, “Sharing means something different to you than to Walt? This is what privacy means?”

Out in the hallway, the verdicts were brutal, with observers saying Zuckerberg seemed lost, in the midst of a panic attack or at the start of a meltdown.

As a young CEO, the pressure on him was clearly immense.

One audience member asked about his leadership style, and how the company had changed in the two years since Zuckerberg had last appeared at the D conference, a landmark event on the calendar of digital companies.

“Do you get that the world sees you diffferently, and expectation changes. And how do you deal with that?” asked one questioner from the audience.

Zuckerberg was direct. “Maybe I’m in denial,” he said. “Our goals haven’t really changed at all. We don’t think of ourselves as a company that’s that successful. We know we have produts people use, they love, and site is growing – but, we’re a lot closer to the beginning than the end.”