Michael Moore is holding nothing back, as seen in a poster (below) for his new documentary “Fahrenheit 11/9.”

The poster calls President Donald Trump a “tyrant,” a “liar” and a “racist.”

According to the film’s synopsis, “Michael Moore’s ‘Fahrenheit 11/9’ is a provocative and comedic look at the times in which we live. It will explore the two most important questions of the Trump Era: How the f— did we get here, and how the f— do we get out? It’s the film to see before it’s too late.” 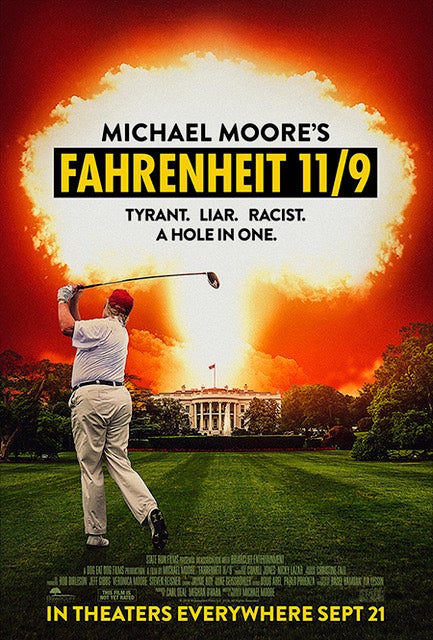 The title of the film refers to the day in 2016 on which Trump was elected president. It serves as a sequel to Moore’s 2004 documentary “Fahrenheit 9/11,” which took a critical look at the events after Sept. 11, 2001 and President George W. Bush’s administration.

In his latest doc, which will hit theaters on Sept. 21, the film’s release is ahead of November’s midterm election where Democrats are hoping to gain control of the House of Representatives and/or the Senate, which the director told Bill Maher was his plan.

“We are living ‘The Handmaid’s Tale,'” Moore said during a June appearance on HBO’s “Real Time With Bill Maher.” “This is a serious point. The best part of the show is the flashbacks, where she tries to figure out where was the point where it was too late. Where was the point that if we all just had risen up, just done something? But because it happens in little increments. That’s how fascism works.”

Moore has said he hopes the movie’s premiere, several weeks before the November midterm elections, will help “get millions of people out to the polls.”