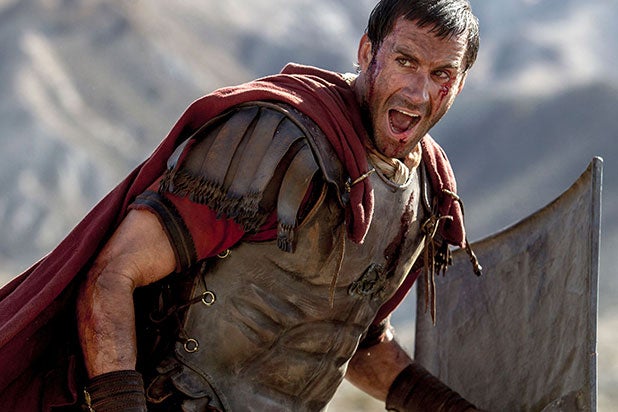 Jesus was no match for Satan at the box office on Thursday night.

The historical religious drama “Risen” is told from the perspective of a fictional Roman centurion, a non-believer who is assigned to investigate rumors of a risen Jewish messiah causing upheaval among the locals.

It’s tracking to open between $11 million and $15 million for Sony, which is more conservative in its projection and pins its hopes on the film playing through Easter on March 27.

Joseph Fiennes, Tom Felton, Peter Firth and Cliff Curtis star in the film, which is directed by Kevin Reynolds, who wrote the screenplay with Paul Aiello and Karen Janszen.

It is receiving mixed reviews, currently holding a 53 percent approval rating from critics counted on Rotten Tomatoes, which is a significantly warmer critical reception than most faith-based films have received in recent years.

“Risen” may turn the tables on “The Witch” by Sunday, since writer-director Robert Eggers’ horror movie is only expected to scare up to $7.5 million during its opening weekend.

With a current 88 percent approval rating on Rotten Tomatoes, the haunting tale that follows a family in 1630s New England being torn apart by black magic has been deemed “fresh.” The horror movie that cost $1 million to make stars Anya Taylor-Joy, Ralph Ineson, Kate Dickie, Harvey Scrimshaw and Ellie Grainger.

Originally, A24 envisioned “The Witch” as a digital/VOD/multiplatform play when it acquired the micro-budgeted horror film after 2015 Sundance Film Festival, where it won the Directing Award in the U.S. Dramatic category.

“The Witch” will be the first A24 movie to open at $1 million or more, and will be well on the path to profitability if it can gross $3 million.

“Race,” the true story of Jesse Owens and his bid to become the greatest track-and-field athlete in history, is the other newcomer of the weekend.

Owens was thrust onto the world stage of the 1936 Olympics in Berlin, where he faced off against Adolf Hitler’s vision of Aryan supremacy.

It was looking at $10 million opening in early tracking, and currently holds a 60 percent approval rating from critics on Rotten Tomatoes.

Of course, Ryan Reynolds‘ “Deadpool” will keep ruling the box office this weekend, as it is expected to take in another $65 million on top of its $150 million haul from its four-day opening weekend.