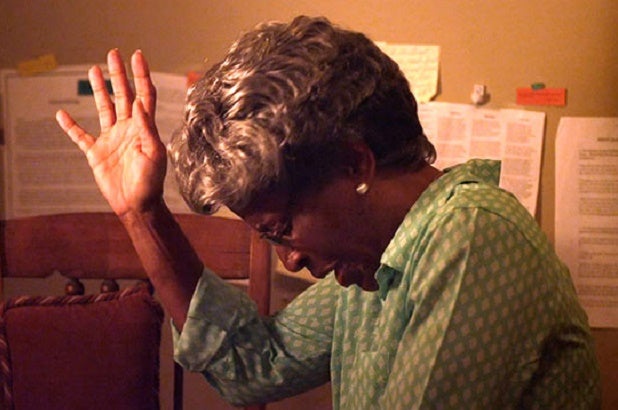 It was the final weekend of the summer box office season and, with youngsters returning to school and Hollywood studios polishing their festival and awards season campaigns, it was among the year’s slowest. But that won’t stop the faithful who lifted Sony’s Affirm Films release “War Room” to the top spot from rejoicing at the second-week triumph by the film, which features an African-American cast topped by Priscilla Shirer, T.C. Stallings and Karen Abercrombie.

Also saying “Hallelujah!” will be Alex Kendrick, who produced with Gary Wheeler, directed, co-wrote and starred in the $3.5 million drama. It will have taken in just under $10 million by Sunday with Monday’s holiday to come, to raise its domestic haul to just under $28 million in two weeks.

Nobody at Universal was down about “Straight Outta Compton.” The F. Gary Gray-directed N.W.A biopic produced by Dr. Dre and Ice Cube with a $29 million budget has taken in nearly $150 million domestically and another $18 million overseas since opening a month ago.

“A Walk in the Woods,” a comedy starring Robert Redford and Nick Nolte, will debut with a little more than $10 million over the four days to take third for Broad Green Pictures and get the better of the weekend’s other wide opener, “The Transporter Refueled.” EuropaCorp’s action reboot, with Ed Skrein taking over as the lead for Jason Statham, will take in an underwhelming $8.7 million over the four days.

Finishing between the two debuting movies was Paramount’s “Mission: Impossible – Rogue Nation.” The Tom Cruise action film is in its sixth weekend of release and has turned into an Energizer bunny. It will take in $8.4 million over the holiday domestically, and this weekend its global haul surpassed the $500 million mark.

Also making an impressive mark was the PG-13 Mexican animated hit “Un Gallo Con Muchos Huevos” (A Rooster with Many Eggs), which will finish seventh with $4.6 million from 395 theaters over the four days for Lionsgate’s Pantelion Films. Despite screening in Spanish with English subtitles and without a significant English-language ad campaign, it posted the best per-screen average of any film in release at $11,140. It also received an “A+” CinemaScore and is the second-best opening ever by a Pantelion film, trailing only “Instructions Not Included.”

Meanwhile, the success of “War Room” confirmed that faith-based films are filling a void in the marketplace for a largely under served audience. Rentrak’s PostTrak audience survey shows that 60  percent of the audience was female and 85 percent was over 25, and they are true believers: a whopping 73 percent said they would “definitely recommend” the movie.

“A Walk in the Woods” made the first wide release for Broad Green Pictures a success, averaging a solid $5,250 in its 1,960 locations. Broad Green acquired the film based on Bill Bryson’s bestselling memoir about two old pals hiking the Adirondacks out of the Sundance Film Festival. As expected it skewed older with 85 percent of the audience over the age of 25, and 55 percent were women. Directed by Ken Kwapis, and co-starring Emma Thompson, Kristen Schaal, Mary Steenburgen and Nick Offerman, the $6 million “Walk in the Woods” received a “B” CinemaScore.

The PG-13-rated action thriller “The Transporter Refueled” was the first wide release for Relativity EuropaCorp Distribution and it averaged a so-so $2,580 at its 3,494 location. Its audience was 61 percent male 67 percent over the age of 25, and they gave the film a “B-” CinemaScore. It’s production budget was $30 million, so it will have to perform overseas to make a profit.

The Labor Day weekend is typically one of the slowest of the year at the box office, and this year the combined total of all the films in release will be roughly $117 million for the four days. That’s lower than the three-day openings posted this summer by Universal’s billion-dollar blockbusters “Jurassic World” and “Minions,” both of which fell out of the top ten, and Disney and Marvel’s “Avengers: Age of Ultron.”