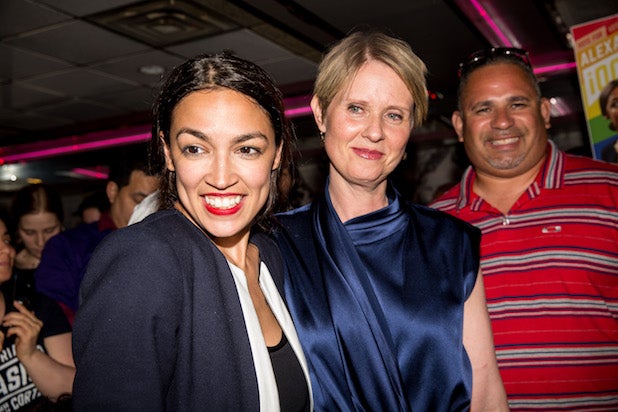 A doctored video (below) that shows Bronx socialist Alexandria Ocasio-Cortez in a bad light has gone viral, and the much buzzed about House of Representatives democratic nominee is calling it out.

CRTV, The Conservative Review, posted a video with manipulated footage of Ocasio-Cortez to make it look as if the Democratic candidate was responding incorrectly to interview questions.

Allie *grills* congressional hopeful and progressive it girl "Alexandria Ocasio-Cortez" on her socialist agenda and knowledge of government… or lack thereof. ????Update: Yes, this is satire created from excerpts of the viral Firing Line interview with Ocasio-Cortez.

Since it was posted Sunday, the video has accumulated more than 1.2 million views on Facebook.

It shows pieced together clips of Ocasio-Cortez’s actual responses from her PBS “Firing Line” interview and clips of CRTV host Allie Beth Stuckey asking questions such as “Do you have any knowledge whatsoever about how our political system works?”

The clip of Ocasio-Cortez, inserted right after the questions, shows her shaking her head no.

The video is captioned “Allie *grills* congressional hopeful and progressive it girl “Alexandria Ocasio-Cortez” on her socialist agenda and knowledge of government… or lack thereof.” Later, CRTV posted an update clarifying that the video is “satire created from excerpts of the viral Firing Line interview with Ocasio-Cortez.”

Also Read: Stormy Daniels and Husband Have 'Decided to End Their Marriage'

Ocasio-Cortez responded Tuesday on Twitter: “Republicans are so scared of me that they’re faking videos and presenting them as real on Facebook because they can’t deal with reality anymore.”

Republicans are so scared of me that they’re faking videos and presenting them as real on Facebook because they can’t deal with reality anymore.

When it comes to the idea that Republicans are scared of Ocasio-Cortez, she may be onto something. At a campaign event over the weekend, U.S. Rep. Ron DeSantis, a Florida Republican, dismissed the Bronx socialist as being “in a totally different universe, it’s basically socialism wrapped in ignorance.”