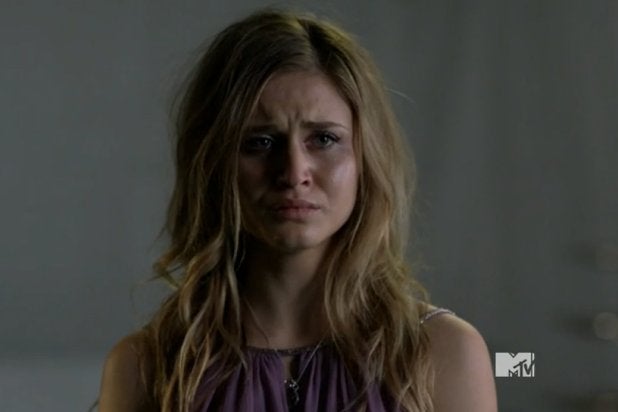 (Spoiler Alert: Do not read on if you haven’t seen the Season 1 finale of “Faking It,” entitled “Burnt Toast.”)

MTV’s “Faking It” has been all about exploring and questioning sexuality, with a lot more fluidity than expected when it comes to any particular sexual orientation. This is particularly true for the best friends at the center of the story, Karma and Amy.

From the beginning, Amy (Rita Volk) had genuine feelings for Karma (Katie Stevens), even when it was clear that Karma was just pretending to be in love with her for the social acceptance. In an interview with Entertainment Weekly published on Monday, Volk said that she had been assured by executive producer Carter Covington, who also developed the series, that Amy was gay.

See video: Stephen Colbert on Coke Ad: ‘Since When Are Gays Allowed to Gay Up’ a Song Written by a Lesbian?

And yet, that’s kind of exactly what happened at the end of the Season 1 finale on Tuesday night. After finally getting clued in that Amy’s feelings for her were real, Karma had to reveal that she didn’t feel the same way. The revelation shattered Amy to her core.

By the end of the episode, Amy wound up in bed and making out with Karma’s lover, Liam (Gregg Sulkin). Sure, they were both drunk, but it was certainly jarring to see the one character who did seem certain of her sexuality suddenly entangled with a guy. If she’s definitely a lesbian, as Volk asserted, then how would this even be possible? Do drunk lesbians discover heterosexual desires for men?

Covington, who is openly gay, spoke out about the controversial finale, as well. “Amy has not self-identified as a lesbian,” he tried to clarify in an interview with Buzzfeed that posted the night the episode aired. “People have put that on her. And I know that our lesbian fans really connect to and relate to her, and I’m so glad that they do, but they’re putting an ending on her journey that we haven’t finished yet.” Except that Volk put that on her, saying that it was Covington who told her.

He went on to say definitively that Amy is not straight, they just haven’t defined yet where on the spectrum she is.

Fans will get to explore Amy’s sexuality more, and maybe seek clarity with her, as “Faking It” has been renewed for a second season by MTV.