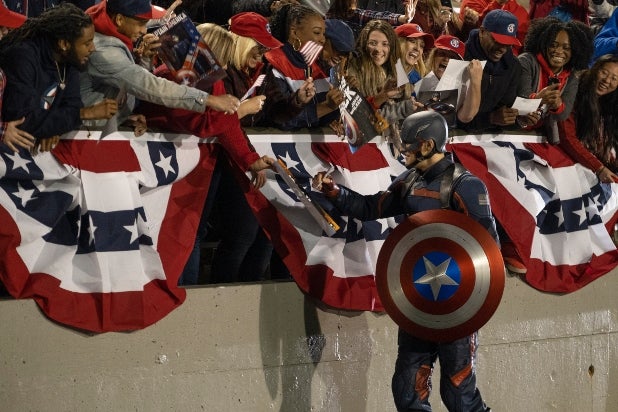 The new Captain America in “The Falcon and the Winter Soldier” is going over about as well as New Coke. Wyatt Russell, who plays John Walker on the Disney+ series, was hoping to stir such a negative response from fans.

“That’s the goal,” he told TheWrap. “I think people had a fun reaction.”

Walker fully stepped into the role of Captain America during last week’s episode, which included frequent tenuous moments with a not-very-happy Sam Wilson (Anthony Mackie) and an even-angrier Bucky (Sebastian Stan). The lack of respect the two give John in his early days with the shield plays into his own insecurities. “He doesn’t feel good. It doesn’t feel good anytime ever you don’t get accepted by somebody,” Russell adds. “You feel s—y about yourself. Right?”

It doesn’t help that he’s replacing one of the most famous people in the Marvel Cinematic Universe, and has to do it without the benefit of the same super soldier serum that Steve Rogers (Chris Evans) was given.

“There’s elements to him where he wants to be able to do it without the super soldier serum. Just be that good,” Russell says. “He does have those ideas in his head of wanting people to like him, like his version of Captain America. It sort of gets rained on and causes him to have to rethink how things are going to be done.”

Despite the poor introduction Walker receives from the two Avengers, he is largely presented as someone who is trying to do his best and live up to the expectations that the original Captain America set. As he tells Sam in last Friday’s episode, it would be a big boost to his credibility to have Cap’s former “wingman” by his side. So when Sam and Bucky shun him (twice), it doesn’t exactly sit well, which is one of the reasons why Walker and his own wingman, Lemar (Clé Bennett) are more menacing towards them at the episode’s end.

Another reason? John is very much aware that Steve wanted Sam to have his shield, who in turn not only refuses his friend’s wishes, but gets royally screwed over by the government who immediately give Steve’s shield to a seemingly random person.

“I think he’s aware of that. It’s like, he has to be aware,” Russell said. “I think they’re [Sam and Bucky] a little bitter. There’s a little bitterness there that’s like, did Sam make the wrong decision?… You kind of see everybody’s egos, inflate, deflate and go through these different machinations to really find out who should be the one who’s going to carry on.”

The Steve Rogers version of Captain America often pitted his World War II-era sensibilities about patriotism and the military against the modern world. With Walker, the modern military finally gets its chance at a fully-militarized Star-Spangled Man. Essentially the complete antithesis of Steve Rogers.

“The military man of World War II is just very different than the military man in today’s age. They just operate differently; the PR machine operates differently. There’s many more opinions about what military should be what their roles should be in the world,” Russell said. “He’s a little bit of a guy who’s just been good at doing his job. And he’s done this to serve and protect, based on some of the things that Steve did, and feels like he just wants to do the job but people aren’t necessarily willing to accept him as the person to do it.”

Russell describes his role going forward as to be a giant wrench thrown into Sam and Bucky’s attempts to bring down the Flag Smashers, which leads the two into a reunion this coming week with Daniel Bruhl’s Zemo.

“He definitely doesn’t make life easier for anybody,” he said. “You’ll definitely begin to see and understand, hopefully, more of why John is the way he is and what drives him to do the things that he does.”