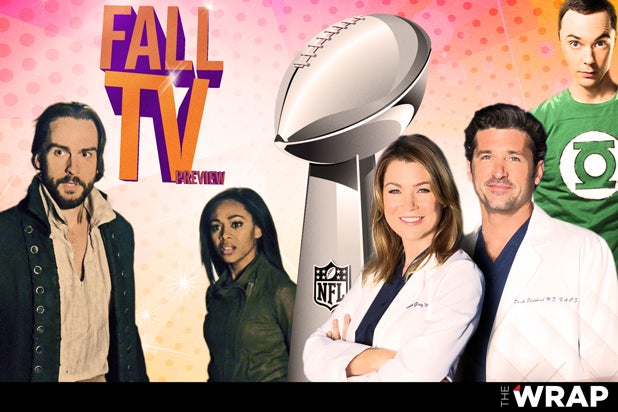 Last season, NBC comfortably topped the competition after years of lagging behind. But can it stay on top in 2014-15?

The short answer: Maybe. The longer one requires a look back before we forecast forward.

In the 2013-14 season, NBC averaged a 2.8 rating in the key 18-49 demographic, according to Nielsen’s Live Plus Seven-Day data. The Winter Olympics helped, and so did “The Voice” and “Sunday Night Football,” television’s biggest show.

Fox was NBC’s closest rival, pulling in a 2.5. Fox had the Super Bowl to thank for some of that success.

Though there won’t be any Olympics this season, NBC will have Super Bowl XLIX — which will be the most-watched TV show of the year, as it always is.

The good news for CBS: It led the way in total viewers, as it has for years, despite dipping nine percent from the prior year to an average of 10.8 million. NBC had the biggest gains in total audience, jumping 33 percent to a second-place 9.4 million.

In its mission to take back the top spot on the podium — which it occupied in 2012-2013 — CBS has a new powerful weapon in this year’s “Thursday Night Football.” It also has “The Big Bang Theory,” which was the No. 2 broadcast show of 2013-14 behind “Sunday Night Football.”

Fox and ABC, not surprisingly, have ordered plenty of new shows they hope will give them an advantage.

Fox has high hopes for Batman prequel “Gotham” and teenage hospital dramedy “Red Band Society,” as well as the returning breakout hit “Sleepy Hollow.” And at times it will benefit from football overruns that leak into primetime.

ABC has “Modern Family,” Wednesday’s biggest show, and Shonda Rhimes‘ new “How to Get Away With Murder.” It will join her “Scandal” and “Grey’s Anatomy” to form Shondland Thursdays, which will counterprogram the NFL on CBS.

ABC has no NFL programming, but will have the NBA Playoffs.