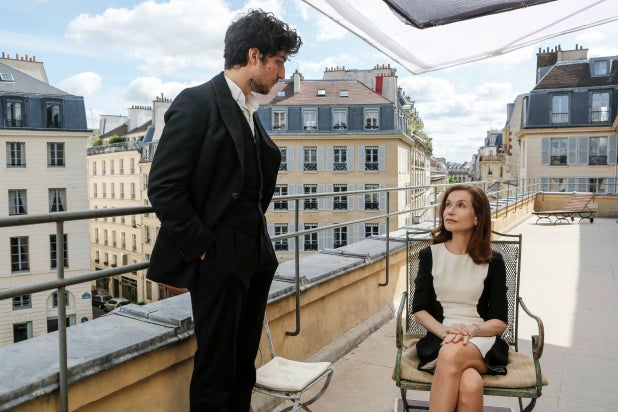 Isabelle Huppert had quite the 2016, with performances in two imports — “Elle” and “Things to Come” — that expertly showcased the intelligence, emotion and flinty sexuality she’s been bringing regularly to international cinema since the early ’70s.

After a spring that saw her receive her first Academy Award nomination (for “Elle”), it’s perhaps no surprise that America’s not-what-it-once-was arthouse circuit would be thrilled to show whatever else of late is in the Huppert hopper. (She routinely appears in between two and five features a year, many of which don’t make it to U.S. theaters.)

But for anyone hoping to continue their Huppert buzz, “False Confessions” is not the fix you want. A modern-dress adaptation of a play by the 18th century French comic dramatist Pierre Marivaux, in which Huppert plays an intrigue-besieged countess, it exhibits all the dreariest traits of filmed theater: frozen between what the stage requires and the cinema demands.

That it also represents the last filmed work of noted Swiss theater director Luc Bondy, who died in 2015, is particularly unfortunate. Not for any reason tied to Bondy’s contributions to movies (the stage was his métier), but because “False Confessions” was filmed in daylight hours at Paris’s famed Théâtre de l’Odéon, at the time the same cast was performing the play there nightly for audiences. (Bondy had been the Odeon’s artistic director from 2012 until his death.) With that knowledge, one watches this dry-as-dust, made-for-television production assuming the Odeon’s evening ticketholders at that time hold a fonder memory of “False Confessions” than will those exposed to this version.

First seen in white satin loungewear doing tai chi on the Odeon’s balcony, Huppert plays wealthy widow Araminte, whose hiring of handsome young secretary Dorante (Louis Garrel, “Saint Laurent”) comes with unexpected complications. He’s not just in love with her, but is also in cahoots with Araminte’s wily manservant (and former employee of Dorante’s) Dubois (Yves Jacques, “Laurence Anyways”) to facilitate a similar feeling of besottedness in the countess. Their methods — reverse psychology and manipulative flattery (with cruel side effects) — are the kind that have fueled three-act French affaires de coeur for centuries.

Caught in the romantic crosshairs is Araminte’s loyal pal Marton (Manon Combes), smitten with Dorante and toyed with as such by the conspirators for their own aims. Araminte’s mother (French cinema legend Bulle Ogier), meanwhile, is suspicious of her daughter’s fetching, overly devoted new employee, but undeterred in her own plan to push into Araminte marrying an older count (Jean-Pierre Malo) with whom the family has a land dispute.

To follow this all takes some work, but the effort seems wasted when so much of the players look like bored, wandering party guests; Garrel in particular seems to recede in every scene he’s in, while Bondy’s often perplexingly angled shots feel removed from the emotions at hand. Huppert is, naturally, occasionally tickling to watch, because she has those bored/penetrating eyes and steely/chic countenance that are hard to ignore, whether sporting a gold tracksuit on a treadmill or playacting heartsickness by collapsing into someone’s arms.

Also Read: 'My Journey Through French Cinema' Review: Bertrand Tavernier Offers Master Class in the Movies That Shaped Him

(I use “playacting” because there’s little to Huppert here that suggests a full-bodied characterization, and yet it feels deliberate, as if to suggest playing a young countess, 45 years after her film debut, is an especially delicious adventure. And in the battle of who rocks dark sunglasses better, Huppert or Ogier, it’s no contest.)

The satisfaction of a thorny romantic scheme laid bare, made more complicated, then brought to an ecstatic close is simply missing from “False Confessions,” which chooses to end with a listless nod to the artifice of the play-within-a-production construct. There’s the tiniest hint that Bondy, perhaps feeling wistful about the Odeon, was after a kind of movie version of environmental theater, a melding of a classic French play with a walking tour of the Odeon’s neoclassical splendors: grand staircases, columns, and marble-floored rooms.

Unfortunately, to follow these characters around is to experience not great theater, nor rich cinema, nor architectural wonder, but rather the itch of the restless spectator.