Eve had fast-food restaurant Popeyes popular dishes on her mind.

Also Read: 'Star Wars' Cast Plays 'Family Feud,' and Billy Dee Williams Has the Balls to Give the 'Penis' Answer We Were All Thinking (Video)

The whole thing might have not been so bad if she stopped there to await her giant red “X.” Instead, Eve performed the most confident dance of all time.

Her family could not believe it.

Here’s how that moment looked in a freeze-frame: 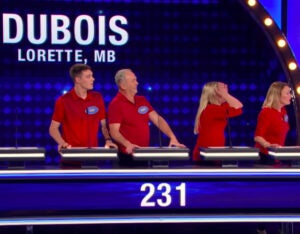 To make matters worse, this was a sudden death face-off. In such scenarios, the person who gives the No. 1 answer wins the game, and their family goes on to play for the $10,000 prize.

Also Read: 'Jeopardy! The Greatest of All Time' Tops 15 Million Viewers on Night 3

The answer was, of course, “spinach.” Competitor Logan — and the rest of the planet — pretty easily came up with that answer.

Eve may have the last laugh on all of us, however.

On Friday, the quick-service restaurant she referenced offered her $10,000 worth of its food.

Eve has been a good sport about her soon-to-be viral moment.

“I had no idea that I was wrong until I turned back to my family,” she wrote on Twitter once her native Canada started to catch on, adding that she was “110%” certain of her answer.

“I thought I won! I was ready to go home and celebrate …” Eve said.

The first question on "Who Wants to be a Millionaire?" is generally the easiest, but this sleep-deprived college student still couldn't manage to get it right.
View In Gallery
x
Looks like you're enjoying reading