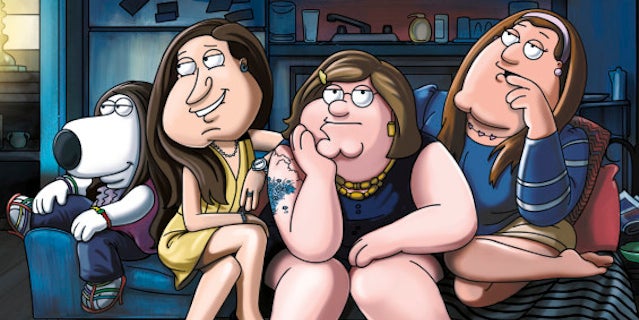 "Family Guy" wants more Emmys, and is reminding the Academy of the "load" of laughs it provides in a new "For Your Consideration" ad, which references one of the most memorable episodes of HBO's "Girls."

"Here's a load of comedy to shoot on your chest," the Emmy ad reads, with animated characters Peter, Joe, Quagmire and Brian replacing the female cast of "Girls."

For those not familiar with "Girls," the second last episode of Season 2 — entitled "On All Fours" — made waves with audiences when a male character (Adam Driver) had rough, domineering sex with a new girlfriend and finished by ejaculating on her chest.

The creative team behind the Fox animated comedy has a history of pushing the boundaries of good taste when asking Emmy voters for a nomination.

Last year, an ad featured Peter Griffin demanding, "Come on, you bloated overprivileged Brentwood Jews. Let us into your club."

"It's a secret ballot," Stewie added. "You can still tell people you voted for 'Modern Family.'"

Here's the full image of this year's plea for recognition: