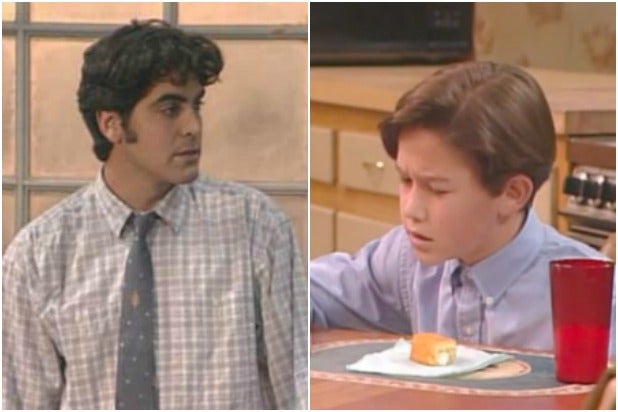 Get ready to feel old — or really young. With the “Roseanne” revival premiering tonight, let’s look back at some famous actors who appeared on the ABC hit in the ’80s and ’90s, before they were stars.

While we can’t say if any of these side characters will make their way into the “Roseanne” reunion, we know anything’s possible. After all, the two Beckys are reunited, and Dan (John Goodman) is back from the dead.

Check out the list of cameos, which includes some Oscar and Emmy winners.

George Clooney
The Academy Award-winning actor and director held the recurring guest role of Booker Brooks from 1988 to 1991 — and this was way before he scrubbed in for “ER.” Booker was the foreman at the factory where Roseanne worked, and also dated her sister Jackie (Laurie Metcalf).

Bob Odenkirk
The “Better Call Saul” lead had a brief appearance in a season 5 episode. He played Dan’s buddy Jim, a shoe salesman who Jackie and Nancy (Sandra Bernhard) mistake for a restaurant health inspector. Hilarity ensued, of course.

Tobey Maguire
The “Seabiscuit” and “Spider-Man” star was first known as Jeff to “Roseanne” fans, a friend of a boy who had a crush on Becky (the Alicia Goranson Becky, that is), in season 3.

James Pickens Jr.
While Pickens is well known for his role as Dr. Webber on the present-day ABC hit “Grey’s Anatomy,” he started as Dan’s good friend and poker-game partner, Chuck, from 1990 to 1996.

Alyson Hannigan
Before she was Sarah Michelle Gellar’s best friend on “Buffy the Vampire Slayer,” set foot in band camp for “American Pie,” or was Lily to Jason Segel’s Marshall on “How I Met Your Mother,” Hannigan had a small part as Becky’s friend Jan in a season 3 episode of “Roseanne.”

Stephen Dorff
Prior to his role in “Blade,” the actor played a love interest of Becky’s in three episodes in 1989.

Joseph Gordon-Levitt
The A-lister, who boasts “Inception” and “The Dark Knight Rises” among his credits, played D.J.’s super-weird friend George in a few episodes from 1993-1995.

The “Roseanne” revival premieres tonight, Tuesday, at 8/7 c on ABC.