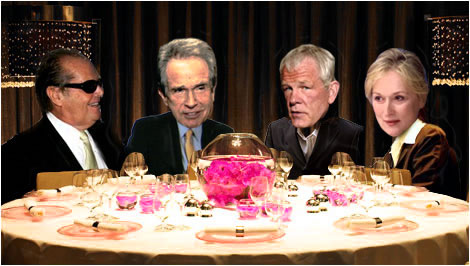 Note: This post has been updated to correct errors and reflect further reporting.

LOS ANGELES – They met in the private room of an Italian restaurant, like in a scene from one of the Godfather movies: Warren Beatty, Jack Nicholson, Meryl Streep, Nick Nolte, Annette Bening — about 20 of Hollywood’s great stars from the past 30 years.

Their faces were grave. The subject was serious: the livelihood of the entertainment industry and the prospect of yet another strike, months after the end of a painful writers guild strike.

These top stars were called together last month by Screen Actors Guild president Alan Rosenberg to give the thumbs up – or thumbs down – on a strike, according to one person who was present, speaking on condition of anonymity.

But others familiar with the meeting, which they said took place a few months ago, say the purpose was to vote on whether to sign a solidarity statement in support of the negotiating committee, which was under pressure to take the deal offered by the AMPTP, at a time when a sister guild, AFTRA, had made its own deal with the studios.

At the time, a strike vote was nowhere on the horizon. Negotiations were Federal mediation was still ongoing between SAG and the Alliance of Motion Picture and Television Producers and Hollywood was in slowdown mode because the guild had been working without a contract since July.

But this elite gathering of stars had an agenda. They were given slips of paper to write down their views — to support guild policy rejecting the studio offer, or not.

Their verdict, according to two sources: to support the guild strategy. Another source said the verdict was to support moving  toward a strike. (Continuing to negotiate while AFTRA made its deal was ultimately a move down the path toward a strike vote.)

A spokeswoman for SAG said that the guild has had frequent meetings with high-profile actors to discuss issues related to contract talks.  "We have met with high profile actors on sets and elsewhere to discuss various issues throughout our negotiations," said Pam Greenwalt. "We do not publicize the meetings nor do we release details."

The rest of the members of the guild of 120,000 will be allowed a more formal vote in the next few weeks as to whether to strike, though many in Hollywood now believe a stoppage is inevitable given the standoff and the current invective between the two sides.

Still, many in the guild have expressed anger in the past two days at the prospect of yet another strike in less than a year, after the three month work stoppage by the Writers Guild of America, at a time of great economic uncertainty.

An online petition against a strike, the No SAG Strike petition, had reportedly gathered more than 5,700 signatures as of Monday evening.

But the idea of a small group of actors being tapped for an early vote while mediation was meant to be the order may anger some members even more.

Negotiations between guild and the studios have been at a standstill for months. While the AMPTP has not budged from its offer of a $250 million increase in its contract with the guild, the union has pushed for more concessions regarding new media. The studios say they cannot possibly give more than they have already offered, a deal similar to that struck with other guilds.

What’s more, the economy has embarked on a downward spiral as the standoff  has continued.

At stake are the fees to be shared on revenues for new media, entertainment distributed in new and as-yet-uninvented distribution channels over the Internet. The guild’s negotiating committee had, late in the mediation, agreed to the new media proposal extended by the studios, but only if the studios granted the guild an increase in the rate of DVD residuals. That fee – established in the decades before DVDs became huge, and a source of resentment among the Hollywood guilds – is considered sacrosanct by the studios, since DVDs constitute a huge part of their profits.

What role these major stars gathered at a favored Hollywood watering hole on the west side of Los Angeles would play in the decision-making of the guild was unclear.

“Everyone was writing their views on slips of paper,” said one person who was present at the secret meeting.

The final decision on a strike will rest with the national board.