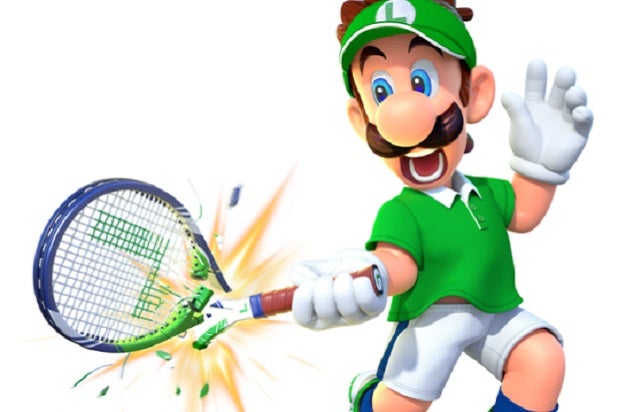 In the age of the Internet, there’s no shortage of people who love Nintendo games, jokes, and puzzles, and have the free time to pursue all three. Today, that combination has blessed the world with the (estimated) size of the cartoon genitalia that belongs to Super Mario’s brother, Luigi.

This extremely societally important measurement is the result of recently-released preview images from the upcoming Mario-branded game, “Mario Tennis Aces.” One of them shows Luigi, Mario’s taller, green-clad brother, reaching for a swing that breaks his tennis racket. And thanks to the shift of his shorts as he twists to make the play, there appears to be a bit of a bulge.

Players immediately latched onto the idea that yes, Luigi is packing. But inevitably, the question became “just what is Luigi packing?” So it is that investigative Twitter user @mithrilbowtie went to work.

@mithrilbowtie noted that because we have tennis rackets out here in reality, that gives a comparative baseline for the size of … things. IRL tennis rackets are approximately 28 inches long, a measurrment that can be translated into pixels, based on the number of pixels used to render the racket in the photo. You can then apply the converted measurement to, uh, whatever you want. See his proof below.

As gaming site Kotaku found, that math has plenty of applications. For instance, the approximate length of Mario’s mustache is about a foot long.

Nintendo fans previously were fascinated to see Mario’s nipples on prominent display in the run-up to Nintendo’s last big game in the “Super Mario” franchise, “Super Mario Odyssey.” In that game, players can change Mario’s clothes, which includes putting him in swim trunks on a level set on a beach. Among the other costumes players can get for him are a parka, a “The Good, The Bad and the Ugly”-esque poncho, and a wedding dress (it makes more sense in the game).