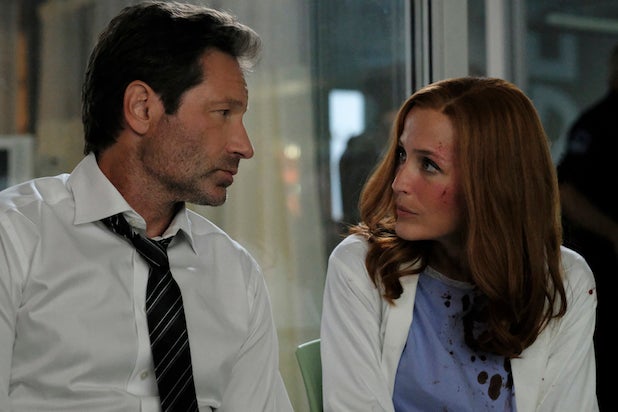 (Note: This post contains spoilers for the first episode of “The X-Files” Season 11.)

The Season 11 premiere of “The X-Files” went a little crazy with retcons and twists as it picked up where Season 10 left off — or more accurately, as it rewrote the major conspiracies that happened at the end of Season 10.

The episode was full of exposition that recontextualized most of the rest of the show, between shots of Mulder (David Duchovny) racing around America in a series of car chase shots. “The X-Files” dialed back from the apocalyptic conclusion of Season 10, which ended with most of the world infected with an alien virus that was set to destroy humanity. Instead it relegated all those events to an end-of-the-world vision for Scully (Gillian Anderson).

The premiere also added a whole bunch of new information about the infamous Smoking Man (William B. Davis) and his family, and set up a whole new conspiracy that spirals around Scully and Mulder’s son, William.

But with all those changes and retcons, fans found themselves a bit lost in the new lore of the show. Many weren’t happy with the writing and direction of Season 10 and Season 11.

that was terrible. it’s ironic that The X-Files was a pioneer of serialized drama and all I want it to do is get back to monster of the week episodes (which, it’s going to do, but I can’t believe how bad the overarching Alien Conspiracy plot’s gotten).

I have been in an abusive relationship for 26 years and its name is The X-Files.

Also Read: 35 Streaming TV Shows You Can Binge Watch in a Weekend (Photos)

The new X-Files appears to be a smoking, steaming pile of crap carried out by people who need money. Seeing multiple shots of Ford Mustang tachometer diminishes the original series.

It's even worse, now. Too much exposition & background noise. Bad dialogue, & too much time spent on a racing car. This is not X-files.

Me after that X-Files premier pic.twitter.com/LuZGWMXMZR

And lots of people were not happy with the final moments of the episode, which revealed that Mulder isn’t really the father of William, but the Smoking Man is. According to series creator Chris Carter, the Smoking Man didn’t impregnate Scully by raping her, but through “science.” But plenty of fans didn’t seem to think the distinction helped much.

Silly me watching new X-Files in 2018 "You impregnated her?!" "With science. Alien science."

Making Scully’s reproduction the vehicle for entire season & her rape at the hands of the CSM the overarching plotline??? NOT OKAY. If there were ever any doubts this show was 100% written & helmed by men, those doubts are ended. Way to fuck that up, Chris Carter. #TheXFiles ????

My feelings in regard to the latest
X-Files twist. pic.twitter.com/bkmWCwuBH7

So this one time I said "Home" was the most disturbing episode of the X-Files… well I was wrong. #Ewwwwww #SomeoneCallMaury #ThisIsDisturbing#XFiles #NoNoNoNoNo

Ew, X-files, EW! Now I have to go bleach my brain.

All in favor for "Mulder is William's father". #TheXFiles