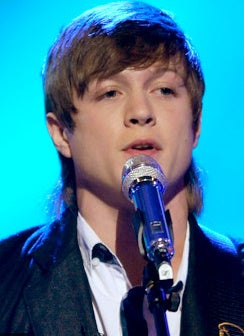 The fans want Lambert back on "American Idol."

No, not Glambert. Young Alex Lambert, whose elimination from the Fox hit on Thursday night drew audible gasps and shock from the studio audience.

Fan Jessica Bongiorno launched her petition almost immediately after the 19-year-old Lambert, who made the show’s Top 24, was voted off on March 11. It had 5,000 signatures in less than 24 hours.

It’s a real grassroots effort, even featuring a video created by friends of Lambert’s mother.

And it has attracted some high-profile supporters as well: Demi Moore has joined the cause, tweeting the petition’s link. As of Wednesday afternoon, more than 16,500 fans had signed the petition. (Update: By late Thursday morning, that number had passed 17,000.)

Bongiorno is posting updates at her blog.

Asked what it was about Lambert that made her launch the petition, Bongiorno told TheWrap: "Everything about this guy pulls at me. His distinctive voice, his adorable face, his demeanor… I absolutely can’t get enough of him. The fact that he’s shy and inexperienced, and tells America that he pretty much wants to vomit from fear before he gets on that stage? Haha, that’s endearing.

"There’s just something about him that melts so many hearts," she added. "In the last week, I’ve gotten emails and phone calls from some of his family members, close friends, whoever. They are some of the sweetest and most kind-hearted people I think I’ve ever spoken to. It makes what I’m doing just that more special to me."

It’s possible that, as in the past, Lambert could return as a "wild card" contestant.