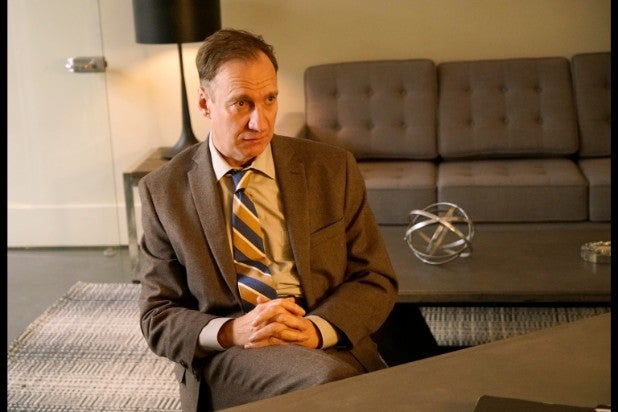 (Spoiler alert: Please do not read on if you haven’t watched Wednesday’s episode of “Fargo”)

“Fargo” Season 3’s wolf-toothed villain V.M. Varga (David Thewlis) loves to spin long metaphorical yarns, often to explain the need for his dubious deeds. In Episode 6, “The Lord of No Mercy,” Varga tells a few “true” tales at the top of the episode in order to explain that perception can create reality.

One of those stories is about the assassination of Archduke Franz Ferdinand in 1914 in Sarajevo. That’s the event that started World War I by kicking off tensions between the Austro-Hungarian Empire and Serbia. Varga’s opening line on “Fargo” sells the story: “The first world war was started by a sandwich.”

Varga says that seven conspirators attempted to kill Ferdinand during his trip to Sarajevo on June 28, 1914. They first tried to blow him up with a hand grenade, but failed to do so, and Ferdinand escaped. Dispirited, one of the conspirators, Gavrilo Princip, headed to a popular sandwich shop to grab lunch, only for the archduke’s driver to pull up in front of the exact same shop after having gotten lost. Princip thus got his second chance and shot Ferdinand, killing him and starting the chain of events that would lead to World War I, World War II, and the modern age.

It’s an interesting story, hinging on how just a few coincidences can change the world. But is it true?

The sandwich version of World War I’s beginnings told on “Fargo” has been around for a bit — but not as long as the story of the assassination itself. According to a Smithsonian.com write-up tracking its origins, it sounds like Varga’s tale popped up around 2003. It’s popular at schools, in books and on websites. But unlike last week’s tale of the coincidental balloon uniting two girls named Laura Buxton, but there’s not a lot of evidence to back up the food-based bits.

The major details of the sandwich story are true. One of the seven would-be assassins did attempt to blow up Ferdinand with a hand grenade, but used one that had a 10-second fuse. That caused the grenade to bounce off the car and blow up on the ground, under the next car in the motorcade. It injured several of Ferdinand’s guards, but he escaped without a scratch.

Also Read: 'Fargo' Season 3: What Does the Wolf at the End of Episode 5 Mean?

Ferdinand changed his plans because of the bombing, heading to meet with state officials instead of driving through Sarajevo. When he was done, he changed his plans again, hoping to head to the hospital to see the injured men.

The car did get lost, and it did wind up near Moritz Schiller’s delicatessen on Franz Joseph Street, where the story says Princip went for the sandwich. But there aren’t any historical accounts of Princip having eaten before the shooting, including his own testimony in court. In fact, Schiller’s wasn’t some out-of-the-way place — it was on the original route of Ferdinand’s motorcade, and Princip was reportedly standing outside it.

That means that Princip was waiting on what would have been the motorcade route; the exact place he should have been if he wanted to assassinate the archduke. The driver made a wrong turn onto the Franz Joseph Street due to being lost in the unfamiliar city, but he was on the route he otherwise would have taken. It sounds more like Princip was where he was because of planning than amazing luck.

Also Read: 'Fargo' Season 3: Who is the Narrator, and What is 'Peter and the Wolf'?

The Smithsonian article runs down the sandwich plot to a 2003 documentary that mentions it as a small detail, rather than a major coincidence, and cites sources from the time like local newspaper articles. But the sandwich as a food itself doesn’t really jive with Serbian culture, the article suggests, and especially not in 1914.

So the story, it seems, is more of an embellishment of a coincidence, stretched by multiple retellings, than an actual fact. But it’s pretty close to the truth. And after all, Varga’s point, and a running theme in this season of “Fargo,” is that when people believe in something enough, it has the potential to become true.

Who’s the worst at crime in Season 3 of “Fargo”? Scroll down to check out our gallery ranking every character by their level of ineptitude.