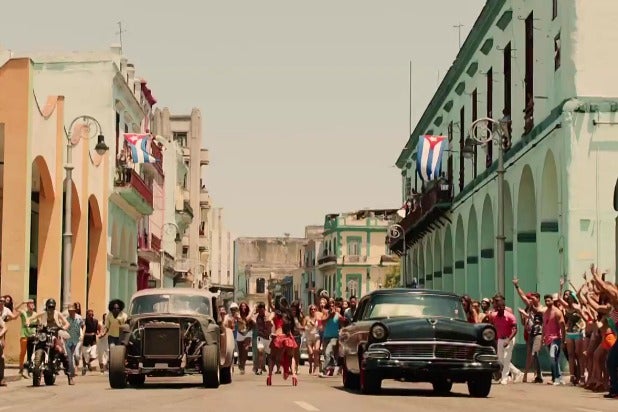 Universal’s “The Fate of the Furious” is already projected to become the second 2017 film to have a $100 million opening weekend. But if the studio has any concerns about the reaction to the eighth installment of the long-running franchise, it likely set them aside after a surprise screening of the film in full during its CinemaCon 2017 presentation earlier today.

Reaction from those in attendance has been very positive, with critics praising it as “fun,” “crazy,” charming, and “ridiculous,” lauding the stunts and fight scenes as well.

Check out a sample of the reaction below:

The Fate of the Furious is another winning entry in the franchise. Crazy, fun, and yet very different feeling. I laughed, I cried, I cheered

The Fate of the Furious takes the ridiculousness of the franchise to a whole new level, yet feels very different. Should be a gigantic hit.

I adored every ridiculous, silly, charming, absurd, fun second of The Fate of the Furious.

Admittedly, that positive vibe might have been primed a bit during the film’s presentation, when star Vin Diesel teared up while talking about co-star Paul Walker, who died in a car accident in 2013. “Part of Paul’s legacy lives through every frame of this shoot,” Diesel said. “Every time you see any of the cast […] on the screen, you are reminded of this angel that was so integral to this concept of brotherhood for our millennium and there’s something beautiful about that.”

Not everyone was sold, however, though even the less-than-glowing reactions still praise the film’s action.

THE FATE OF THE FURIOUS features some great action set pieces but I think I may be too old for this franchise, which just isn't the same now

The previous installment in the series, “Furious 7,” rolled to $353 million at the domestic box office and more than $1.5 billion worldwide — boosted by $391 million at the Chinese box office, where it became the highest-grossing Hollywood film of all-time.

'Fate of the Furious': 8 Craziest Moments From First Trailer (Photos)

We finally got our first look at the eighth movie in the "Fast and Furious" franchise, dubbed "The Fate of the Furious." And the trailer was quite a doozie -- it showed us Dominic Toretto (Vin Diesel) turning on his family, as well as a parade of increasingly insane stunts and set pieces. So insane that street racing in Cuba seems positively mundane. Let's take a look.