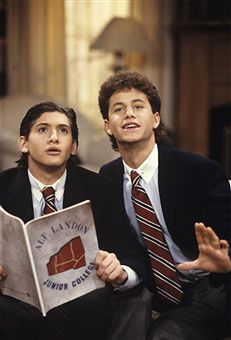 A search party of missing actor Andrew Koenig’s friends found his body Thursday in a sprawling Vancouver park, and his father later said the 41-year-old "Growing Pains" star had taken his own life.

About 10 of Koenig’s friends assembled in the morning for one final sweep of Stanley Park, which is near downtown and is larger than New York’s Central Park, his father, Walter Koenig, said at a press conference.

Walter Koenig, who played Chekov on the original "Star Trek" series, joined them. About two hours in, his cell phone rang and a friend delivered the news that his son’s body had been found.

"We were looking for some clue, and (a friend) phoned us and said they had found Andrew’s body," Koenig said at a press conference. "I went to the site, and … my son took his own life."

Neither police nor Koenig’s family disclosed the cause of the actor’s death.

Koenig, who played Richard “Boner” Stabbone on the hit 1980s show starring Kirk Cameron, went missing on Valentine’s Day. His parents reported him missing after he did not board a flight to Los Angeles from Vancouver.

Earlier this week, police in Vancouver said they had evidence that indicated Koenig was alive and “lying low.” He had sold his possessions and vacated his Los Angeles-area apartment before heading to Vancouver to visit friends.

His parents had said their son had recently sent a despondent-sounding letter and quit his anti-depressant regimen last year.

Koenig appeared in 25 episodes of "Growing Pains" during its five-year run, starting in 1985. He also appeared on "21 Jump Street," "My Two Dads" and, treading lightly in the footsteps of his father, on an episode of "Star Trek: Deep Space Nine" in 1993.