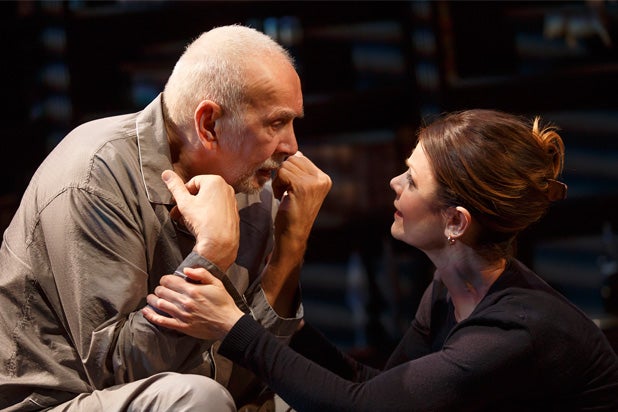 Everyone has experienced the panic: You’re crossing a busy city street on a green light when you realize, as the traffic comes barreling along, that it’s actually a red light. You dart for the closest sidewalk, and the panic quickly subsides. Florian Zeller’s “The Father” takes that momentary, frightening disorientation and extends it for about 90 minutes. The title character has Alzheimer’s (although that disease is never mentioned), and people and places keep switching on him with the alacrity of a capricious traffic light.

Zeller’s 2012 play has been adapted from the original French by Christopher Hampton, and its American premiere took place Thursday at MTC’s Samuel J. Friedman Theatre. Frank Langella plays the lead character, Andre, and the beauty and the horror of seeing “The Father” is that Zeller puts us inside his head for most of the drama.

A devoted daughter, Anne (Kathryn Erbe), cares for Andre, but nothing is immediately clear about the situation. We’re unsure if it’s his apartment or hers. She tells him she’s moving to London, then she’s not moving. Later, she is moving. Does she have a husband (Charles Borland), or is that scene a flashback that Andre is experiencing in the present? Erbe’s Anne at one point is replaced by another actress, Kathleen McNenny, who later in the play is a professional caretaker and a nurse. Is Anne’s current boyfriend, Pierre (Brian Avers), really verbally abusive to her father, or is Andre imaging it — just as he must be imaging it when Borland appears on stage to repeat the same words?

As usual, Langella gives a big, showy performance. That approach has sometimes been a distraction in the past. Not with “The Father,” which is really one long mad scene.  Langella’s larger-than-life performance becomes the character’s way of trying to hang on to life.

There’s more than a glimmer of the man Andre once was: fastidious, smart, demanding, immensely flirtatious, and unafraid to pick sides in the sibling war between Anne and a sister we never meet but whom he talks about in the most flattering terms. Andre can do everything he used to — dance, strut around, rant and rave — only his mind has a serious short circuit. He’s trapped, and the curse is that he knows it.

Zeller has underwritten the supporting characters, and director Doug Hughes is wise to keep those performances very understated. Especially fine are Kathleen McNenny as the woman and Charles Borland as the man. There’s something menacing in how matter of fact they are when interacting with the totally bewildered Andre.

Also Read: 'American Psycho' Broadway Musical Is So Bloody, Audiences Are Getting Splattered

Zeller tells his story from Andre’s viewpoint, so it is bewildering — and not in a good way — when the playwright includes scenes that have the daughter conversing with other characters in Andre’s absence. It’s like a first-person narrator being ditched halfway through a novel. These scenes provide exposition, but give us a chance to regain our balance. Because Andre never regains his, neither should we.