Suzan-Lori Parks’ new drama, “Father Comes Home From the Wars (Parts 1, 2 & 3),” which opened Sunday at L.A.’s Mark Taper Forum and plays through May 15, is remarkable for being both serious and seriously entertaining.

It’s an ambitious, nearly three-hour production that breaks new ground in depicting the now-familiar era of American slavery. First, the play explores some of the complicated moral dilemmas faced by the slaves themselves, giving them an agency and a culpability that is far too often bypassed. And second, it frames the conflict not as some stilted, hyper-serious period piece — but as a yarn loaded with modern idioms and an often whimsical humor.

The central figure is the aptly named Hero (Sterling K. Brown, reprising the role from the original 2014 production at NYC’s Public Theater), the No. 1 slave on his Southern plantation who’s invited to join his master-boss (Michael McKean) to fight for the Confederacy in the Civil War.

What’s unusual is that Hero has apparently been given a choice in the matter, and the dubious promise of freedom if he agrees to don a Confederate uniform and wage war against his own self-interest. And soon his fellow slaves begin wagering on whether he’ll join the Confederate fight.

In the second act, Hero finds himself on the road with his boss-master and a Union prisoner of war (Josh Wingate), who provides yet another perspective to the mid-19th-century African American experience. The Union soldier also offers Hero a potential path to freedom, one that carries its own set of risks.

Hero returns to the plantation and to his sweetheart, Penny (Sameerah Luqmaan-Harris), for the final act, a tour-de-force homecoming that elevates everything that has come before. Parks, who is best known for the 2002 Pulitzer Prize winner “Topdog/Underdog,” proves herself a master at fusing the highbrow and the low. 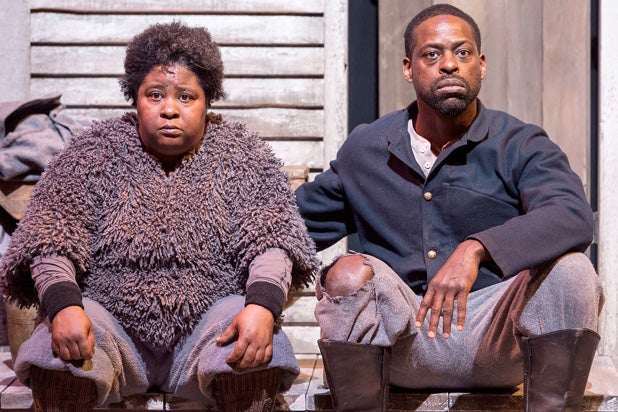 On the one hand, she adopts a traditional three-act play structure and uses deliberate echoes of classic Homeric literature, giving the leads names like Hero and Penny and Odyssey, for Hero’s loyal dog. On the other, she mixes in anachronistically modern language (“It’s not dark enough yet to jet,” one runaway slave says) and makes that dog (played with off-the-leash comedic flare by Patrena Murray) a hilarious flesh-and-blood character and source of necessary comic relief in the final act.

Parks has found suitable partners in the effective staging of director Jo Bonney, the simple but evocative set designs of Neil Patel, and Esosa‘s costume designs, which mix henleys and sneakers with floor-length skirts and soldiers’ uniforms.

Parks has conceived “When Father Comes Home From the Wars” as the first trilogy in a nine-play cycle that will eventually extend to the present day. But it’s already clear that the legacy of slavery will be hard to shake, both for the indignities and wrongs visited upon African-Americans — and, perhaps more tellingly, for the wrongs they may have inflicted upon each other.