Robert Downey Jr. has a warning for “Iron Man” fans.

Strap yourselves in for “2.”

“We’ve upped the stakes,” Downey told TheWrap. “We didn’t take ourselves seriously but we took the storytelling very seriously.”

Fans watching the footage previewed by director Jon Favreau and most of the cast at Comic-Con 2009 on Saturday afternoon confirmed Downey’s excitement with cheers.

“The fans have been punished by studios who don’t care,” Favreau told reporters at a press roundtable after the open panel and screening. “We try to do things that are a bit unexpected.” 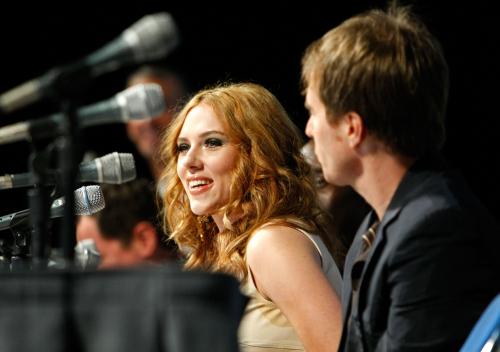 Scarlett Johansson, who joins Downey and Favreau as the Black Widow, agreed with her co-star and the director. “In my mind,” she told The Wrap, “I compare this with ‘Hamlet’ — and this is the second act, and a lot of the characters have to make a choice.”

“’Iron Man’ sold itself here two years ago,” Downey said of the film’s 2007 debut to the hardcore comic crowd that hits San Diego every year, “and then it became a rousing success.” Asked what was different this time round, he centered on story, the freedom allowed them after the big box office of the first film and the expanded cast.

“We will work our asses off to make this work,” Downey said of the attitude he and Favreau sought to bring from the first film. “Now I was saying it to three or four new people.” He raved about the “creative coalition” he and Favreau formed with new cast members Johansson, Mickey Rourke, Sam Rockwell and Don Cheadle.

“With Don,” Downey said leaning back on his chair with a smile in one of the convention center’s smaller rooms, “he’s someone I feel a real rapport and ease with. And he’s not intimidated by me, so I wanted to really bring that to the screen.”

“Robert likes to work like I do,” said the actor, who replaces Terrence Howard in the role of Tony Stark’s official best friend and military liaison Lt. Colonel James Rhodes. “As an actor, it was very encouraging to grab onto something that felt very real.”

Asked by fans earlier if he would direct the expected ‘Avengers’ film, Favreau said he is taking it one film at time. “In a year,” pointed out Favreau, who is going into the edit suite for the next several months to work on “Iron Man 2” for its May 2010 release, “it will be four years in this world of Marvel films for me –and the trick is you’ve got to be enthusiastic about them.”

“It’s been a great ride, but I don’t know if direct ‘The Avengers’ after ‘Thor’ and what happens with ‘Captain America,’ but I’ll be involved as executive producer for sure, so we’ll see.”

Rockwell, whose character Justin Hammer tries to fill the space that Stark’s left because he’s not going to make weapons anymore, seemed to still be buzzing from the panel. “Its exciting to see that trailer,” he said, “I mean we just wrapped a week ago.” He described Hammer as “a bit of Lex Luther, a bit of Bill Murray, Bernie Madoff and Lou Dobbs and the Jeremy Piven character in ‘Entourage.’”

Rockwell told The Wrap that he thinks part of the chemistry of the ‘Iron Man’ franchise is the indie film background of himself, Downey and the other actors and their ability to explore the people under the armour and suits.

Johansson boiled the film down to what she’s sees as its essence and what she hopes is its appeal. “It’s good and evil,” she said. “It’s epic, there’s not a lot of gray,”

No, but there will be a lot of metal.