She was given her last rites on Thursday morning, and longtime partner Ryan O’Neal and several friends were with her during her last hours at a Los Angeles hospital.

Earlier this week it was revealed that O’Neal planned to marry Fawcett. "I’ve asked her to marry me, again, and she’s agreed," O’Neal told Barbara Walters in excerpts of an interview set to be broadcast on ABC’s "Good Morning America" Friday.

"She’s gone. She now belongs to the ages. She’s now with her mother and sister and her God," O’Neal said in a statement released Thursday morning. "I loved her with all my heart. I will miss her so very, very much. She was in and out of consciousness. I talked to her all through the night. I told her how very much I loved her. She’s in a better place now."

The actress had been very public with her battle with cancer. "Farrah’s Story," a two-hour NBC documentary about her illness which the actress shot with friend Alana Stewart, aired May 15. O’Neal told the press that Fawcett’s blood pressure rose as she watched and was heartened by the film, which will be re-broacast at 9 p.m. ET Friday. 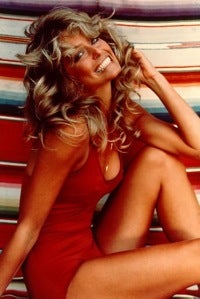 The result was a tremendous public outpouring of support and sympathy. One posting on Newsday just before her death, summed it up: "God Bless you! You were so strong the whole time you were sick and never stopped smiling! The world will never forget that "Special" Charlies’ Angel!!!"

On "Angels," Fawcett played Jill Munroe, the athletic, humorous one in a trio of female investigators that also included Kate Jackson and Jaclyn Smith. Fawcett’s blonde, trademark feathered hair on the show quickly set a trend for many women in the ’70s who tried to emulate her iconic style via a line of hair-care products marketed under her name.

The program was the top-rated show of the 1976-77 season, boosting Fawcett’s appeal. She was featured on one of the most popular posters of the decade with teenage boys, appearing in a wet, red swimsuit flashing a toothy grin. An estimated 6 million of the posters were sold.

The actress found it hard to break away from her image as an Angel until 1981, when she got a role in "Cannonball Run," starring Burt Reynolds and in the made-for-television movie "Murder in Texas." The latter marked her foray into a number of made-for-TV films — including 1984’s highly acclaimed tale of domestic abuse, "The Burning Bed."

Mary Farrah Leni Fawcett was born on Feb. 2, 1947, in Corpus Christi, Texas. Her father, James William Fawcett, was an oil pipefitter who later founded a pipeline construction company and a custodial service.

She enrolled at the University of Texas in Austin, where she initially planned to study microbiology but later switched her major to art. She began modeling for newspaper advertisements and art classes during college, where she was voted one of the ten most beautiful women on campus.

After receiving that accolade, publicist David Mirisch contacted her and urged her to pursue a career in entertainment. She moved to Hollywood after her junior year and got an agent. She also met actor Lee Majors, and the couple married in 1973 but later divorced in 1982.

Fawcett had a number of guest starring roles on popular ’60s television shows while modeling on the side in magazines like Vogue and Cosmopolitan and on commercials for Noxzema shaving cream. Her first feature role came in 1969 in the French film "Love is a Funny Thing."

In 1995, Fawcett raised some eyebrows when she posed for nude pictures in Playboy magazine and a video titled "All of Me," in which she created art in the nude.

The week before her death, O’Neal said the couple planned to wed. "I’ve asked her to marry me, again, and she’s agreed," O’Neal said in the Walters inteview.

She was deemed cancer-free in February 2007, but three months later, doctors found a small malignant polyp in the same area. The cancer later spread to other parts of her body, including her liver.

A funeral service will be held at the downtown Catholic cathedral in Los Angeles in the next few days.