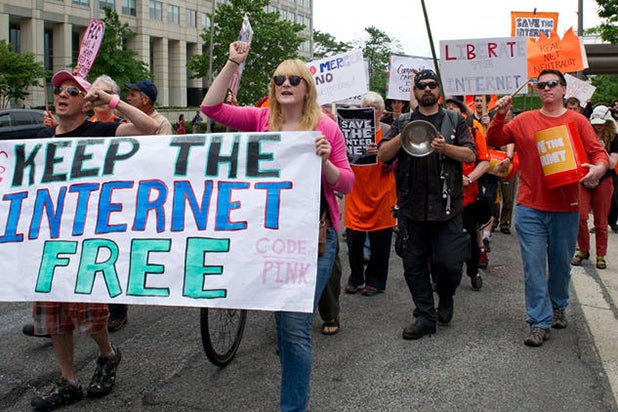 The flood of open Internet comments into the Federal Communications Commission has become a virtual deluge. By Friday afternoon, the FCC had received more than a million comments, with additional comments continuing to flow in as the midnight deadline approached.

Consumer groups said the vast number, besides appearing to set a government record for public comments in any government rule-making proceeding, demonstrated the strong interest in the issue.

Comments have come from Internet Service Providers, broadcasters, the movie industry, major technology companies, unions, but most of all from individuals whose interest was fueled by consumer groups’ social media campaigns.

Almost all the comments from consumers have asked the FCC to act more strongly to preserve an open internet than Chairman Tom Wheeler has proposed.

Wheeler has suggested the FCC limit on what providers of wired but not mobile broadband could do. He has questioned whether the FCC should ban providers from charging for paid priority, but instead proposed service providers be allowed to engage in “commercially reasonable” practices.

The Independent Film & Television Alliance urged the FCC to prevent conglomerates from putting independent film makers “at a severe disadvantage.”

The group noted that it was already warning the agency about the impact of industry consolidation four years ago, and since then, “the consolidation has only expanded,” IFTA said, pointing to Comcast’s deals for NBC Universal and Time Warner Cable and AT&T’s deal for DirecTV.

The group warned the deals would expand the ability and incentive for service providers to give affiliated content preferential treatment.

“This will shut out or restrict consumer access to independently supplied content and place independently owned online video distribution services and content at a severe disadvantage.”

It urged the FCC to ban service providers from favoring one company’s content over another or from charging content providers extra to access a “fast lane” to consumer’s door step, stating that that was “critical in preventing broadband providers from disadvantaging lawful independent content by favoring of self-owned or affiliated content, services and applications.”

“WGAW has been a strong supporter of the open Internet because writers recognize the importance of this platform for free speech, creativity, competition and diversity,” the group stated. “It is a means of reaching an audience directly, free from the filters of the few large companies that control film and television.”

WGAW said an FCC failure to ban paid prioritization “will cripple the open Internet, and will advance only the economic interests of broadband internet access providers, to the detriment of free speech, competition, and democratic discourse.”

“Adopting strong net neutrality is the best way to support the virtuous circle of increasing investment in broadband networks and the applications that drive the demand for faster, more affordable Internet access,” the streaming giant said. “To ensure that the Internet continues to grow as platform for consumer choice and economic growth, the commission should use all the statutory and non-statutory tools at its disposal to adopt strong open Internet protections.”

For its part, Microsoft urged the FCC to protect both wired and mobile connections and to ban paid prioritization.

“Microsoft’s longstanding commitment to ensuring that the Internet remains an open platform for competition, innovation, and economic growth is based in part on Microsoft experiencing firsthand the blocking, degrading, and impairing of consumer access to lawful online products and services at the hands of some broadband access providers, particularly in jurisdictions without open Internet protections,” the company said.

“Allowing preferential arrangements for some internet traffic would be incompatible with the fundamental principles of an open internet. A rule that prohibits blocking is critical.”

It warned the allowing a fast lane on the Internet would “distort” the market and “frustrate, innovation, competition and economic growth.”

Microsoft also said the FCC’s attempt to protect only wired connections is outdated.

“Mobile broadband has become a critical means for edge providers to reach consumers online, and for consumers to use services of their choosing to communicate, engage in commerce, and be productive and engaged global citizens. Mobile and fixed broadband access services must be subject to the same legal framework,” it said.

Microsoft’s position put it at odds with the views of the Consumer Electronics Association, of which it is a member.

“Broadband providers’ flexibility would be compromised significantly by heavy-handed regulation that is unnecessary in today’s broadband market,” the CEA said in its comments. “The commission should focus on forward-looking efforts such as deploying more spectrum and promoting competition, an approach that will lead naturally to continued Internet openness.”

The group urged the FCC allow “individualized arrangements that are “commercially reasonable.”

A group of two dozen musicians, authors and composers that included Nicole Atkins, Brett Lyman, and Charles Bissell (The Wrens), describing themselves as “musicians, songwriters, entrepreneurs, rabble-rousers, advocates, innovators, internet users and members of the public,” urged the FCC to act more strongly.

“We artists tend to think our stuff is the best which is why we want it to compete on its own merits, rather than be subject to the whims of a handful of powerful ISPs,” the group said. “We believe that our work must be valued in a way that is commensurate with demand.  Yet we also believe that we disadvantage upcoming generations of artists and fans if we allow Internet Service Providers to pick winners and losers online based on business — or even political — preferences.”

Wheeler said he was grateful so many citizens have taken the time to send the FCC comments on the matter.

“When the Commission launched its effort to restore Open Internet protections that were struck down in January, I said that where we end up depends on what we learn during this process,” Wheeler said. “Our work is just beginning as we review the more than one million comments we have received.”

He said that there is “no question the Internet must remain open as a platform for innovation, economic growth and free expression,” and called Friday’s deadline “a checkpoint, not the finish line for public comment.”

The push for the FCC to act from the public, artists and some tech companies comes as Internet Service Providers warn against the FCC acting strongly.

“For more than a decade, investment and innovation flourished throughout the Internet ecosystem despite the absence of any net neutrality rules,” said AT&T. “During that time, broadband Internet access providers poured more than a trillion dollars into next-generation networks capable of providing advanced services.”

It credited the growth the balanced policy the agency adopted in weighing additional protections.

“The commission should do nothing in this proceeding to upset that balance,” it said.