Netflix was one of those with the praise. It said consumers got a “win” from the decision.

“Today’s order is a meaningful step towards ensuring ISPs cannot shift bad conduct upstream to where they interconnect with content providers like Netflix,” the company said in a statement.

At the same time, the company said the FCC needs to be vigilant in enforcement.

“Net neutrality rules are only as strong as their weakest link, and it’s incumbent on the FCC to ensure these interconnection points aren’t used to end-run the principles of an open Internet,” Netflix said.

Apple co-founder Steve Wozniak was caught on camera applauding following the vote and posted on Twitter that he “had to be there.”

We had to be there. (@ Federal Communications Commission (FCC) – @fccdotgov in Washington, DC) https://t.co/zrdLCk9tID

“This is a victory for the people … the consumers, the average Joe’s against the big suppliers who have all the power and the wealth and make the decisions for them,” Wozniak told Bloomberg TV. “They feel hopeless and helpless. I see it as an indication that the people can sometimes win.”
Also pleased were musicians.

“This historic day is a testament to what can be achieved when the creative community comes together with a diverse array of advocates and activists to stand up for free expression and entrepreneurship,” Rae said.

“We join with millions of Americans in celebrating today’s victory for consumers, innovators and entrepreneurs,” said a number of Democratic U.S. senators in a joint statement.

U.S. President Barack Obama sent a handwritten note to Reddit users, thanking them for their support of the vote effort: “Thanks Redditors! Wish I could upvote every one of you for helping keep the internet open and free!”

He also sent an email, which said, “Earlier today, the FCC voted to protect a free and open internet — the kind of internet that allows entrepreneurs to thrive and debates over duck-sized horses and horse-sized ducks to persist.”

Michael Powell, a former FCC chairman who is now president and CEO of the National Cable and Telecommunications Association, called the FCC’s action “one of the most regulatory steps in its history.

“The FCC has taken the overwhelming support for an open Internet and pried open the door to heavy-handed government regulation in a space celebrated for its free enterprise,” he said. “The Commission has breathed new life into the decayed telephone regulatory model and applied it to the most dynamic, free-wheeling and innovative platform in history.”

Republican members of the House Judiciary Committee in a letter sent to Wheeler today expressed deep “disappointment” with the decision.

“Today’s rules do not offer an enduring solution, only a partisan headline for a partisan initiative that is destined for years of litigation, generating years of debilitating uncertainty,” said the letter. It also suggested the FCC’s action to reclassify connections as utility like could hurt the agency’s anti-trust and consumer enforcement efforts.

Also Read: Netflix Chief on Cuba Deal: ‘Now They Just Have to Get the Internet’

Comcast EVP David L. Cohen said in a blog post  that the company supports an open Internet, but questioned the FCC’s decision to reclassify broadband as a telecommunications service.

“We are disappointed the Commission chose this route, which is certain to lead to years of litigation and regulatory uncertainty and may greatly harm investment and innovation,” Cohen wrote. “We just don’t believe statutory provisions designed for the telephone industry and adopted when Franklin D. Roosevelt was president should be stretched to govern the 21st Century Internet.

“We know that our business has grown and thrived because consumers want access to everything that the Internet makes possible, and we want to meet that demand. This is why we have no issue with the principles of transparency and the no blocking, no throttling and no fast lanes rules incorporated in today’s FCC Order. But we remain deeply concerned that implementing those principles through [reclassification] will do more harm to the vibrant Internet ecosystem than good.” 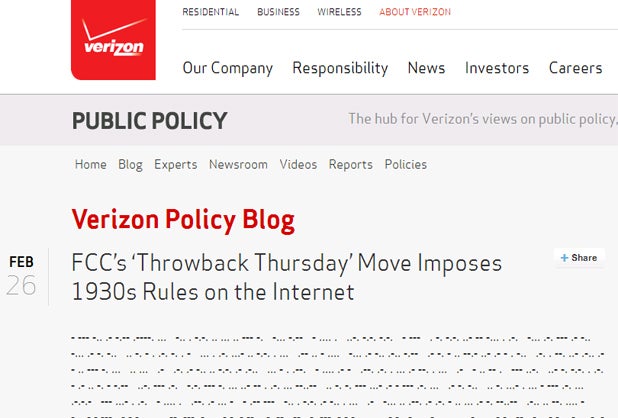 A translation of the statement issued in PDF format included old-typewriter-style font.

“The Federal Communications Commission approved an order urged by President Obama that imposes rules on broadband Internet services that were written in the era of the steam locomotive and the telegraph,” the statement began.

“The FCC’s move is especially regrettable because it is wholly unnecessary,” Glover continued. “The FCC had targeted tools available to preserve an open Internet, but instead chose to use this order as an excuse to adopt 300-plus pages of broad and open-ended regulatory arcana that will have unintended negative consequences for consumers and various parts of the Internet ecosystem for years to come.”

MPAA, which has repeatedly declined to take a position on reclassification said its main concern with net neutrality is whether it could impact piracy and copyright infringement.

“The MPAA member studios, like everyone, want to see the Internet continue to flourish,” said an MPAA spokesman. “Our narrow focus throughout the network neutrality debate has been to ensure that the rules do not thwart efforts to prevent copyright infringement, or otherwise chill production and distribution of innovative content. Until we see the order we cannot know for sure, but the FCC has previously indicated that it would continue to make clear that the rules do not apply to unlawful transmission of content, and would refrain from regulating parties on the edge of the Internet, such as content creators.”

Producers Guild of America Co-Presidents Gary Lucchesi and Lori McCreary issued the following statement in support of the FCC ruling:

“The Producers Guild of America applauds the FCC’s recently announced regulations supporting net neutrality. We believe that the FCC’s approach is realistic and provides producers of creative content with a powerful affirmation that internet distribution channels will remain equally and fairly accessible to all services, voices and perspectives,” Lucchesi and McCreary said.

TheWrap will continue to update this post with responses to the FCC’s action.