Federal Communications Commission chairman Julius Genachowski set off a fierce barrage from senators Wednesday as he told a Congressional committee that he plans on moving forward to implement net neutrality and the agency’s National Broadband plan.

Genachowski told the committee that the FCC is still reviewing last week’s ruling by a three judge panel of the U.S. Court of Appeals that questioned the FCC’s authority to regulate the internet. 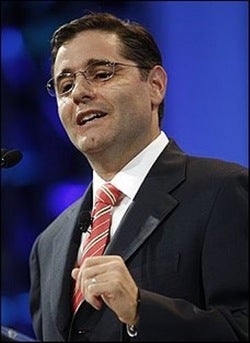 “Notwithstanding the decision, I am convinced the commission has the authority it needs,” Genachowski testified, suggesting that the ruling reflected problems in how the agency legally justified its actions more than its actual authority.

He said moving forward is vital on both issues. “The status quo is not good enough,” he said. “Millions of people live in areas without broadband.”

Some Republican members of the Senate Commerce Committee warned he was stepping into dangerous territory. “If you want to make policy, you need to pay the filing fee, run and sit at this end of the table,” said Sen. Mike Johanns, R-Neb., referring to the side where senators sit.

Johanns said the FCC doesn’t have the authority to act on net neutrality and should work with Congress to get any internet authority it needs.

Sen. Kay Bailey Hutchison, R-Texas, warned that any step by the FCC to regulate the internet could stifle the web’s growth and would be dubious legally. “In my judgment, if the FCC reclassifies broadband [as a phone service] — as has been suggested by some — without a directive from Congress, the legitimacy of the agency would be seriously compromised. I urge you to step back.”

“I want you to make things happen,” said Sen. Byron Dorgan, D-N.D. “I’m not a big fan of the light touch. We need a referee. I hope you will not shy away from making tough choices.”

Snowe said non-discrimination rules have been in place for more than 70 years. “We aren’t trying to regulate the internet,” she said. “We are trying to keep it as it is.”

Answering a question from Snowe, Genachowski warned that ramifications of a world without net neutrality “could be bad.” He said the U.S. leadership in technology and innovation “goes away” “If we don’t preserve the freedom and openness, other countries will lead,” he said.

While the hearing was about the National Broadband Plan, two senators hinted the court ruling could have impacts on the Comcast-NBC Universal deal.

Committee chairman Sen. Jay Rockefeller, D-W.Va., indicated some anger at Comcast for the ruling, which he called “disheartening.” “No doubt the messy situation that Comcast has so generously put us in adds to [the FCC’s task]. I want you to exercise all the authority you have,” he said, speaking of the broadband plan.

Sen. Maria Cantwell, D-Wash., asked Genachowski whether the FCC would now have to extract more merger conditions from Comcast in the deal because of doubts about the FCC’s authority. Genachowski declined to answer directly, but said the FCC is reviewing the transaction.

“There are many issues in the transaction, and we are taking them one by one,” he said.