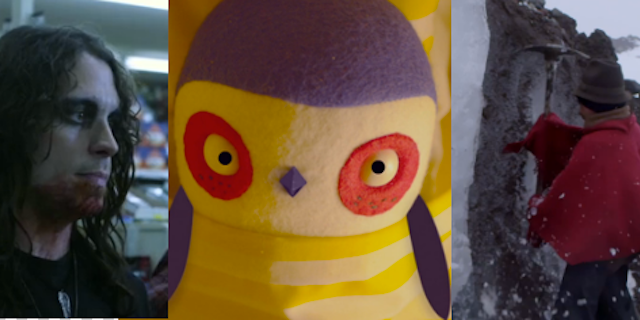 The films are available to viewed and voted for until Aug. 29, when the winners will be announced during a ceremony at the Santa Monica Airport in Los Angeles.

Finnegan's nine-minute "Fear of Flying" is a must-see for any fan of stop-motion animation. It follows a bird who must overcome the unusual obstacle in order to escape a dreary winter and joins his friends in a southern paradise. It was named Best Animated Short Film at Irish film festival Galway Film Fleadh, as well as the L.A. Shorts Fest the same year.

Candler's "Black Metal" focuses on a metal singer who must cope with the unintended consequences of his music when he learns that a fan committed a grisly murder, citing his band as an influence. The nine-minute film won the Short Grand Jury Prize at the 2013 Dallas International Film Festival and took home the Grand Jury prize in the Narrative Short category at the 2013 deadCENTER Film Festival.

"The Last Ice Merchant," one of just two short-form documentaries in the competition, explores cultural change and how three brothers have adapted to it after their family's profession is no longer appreciated the way in once was in Ecuador. The 14-minute film was screened in numerous film festivals in 2012, claiming prizes in three of them, including the 2013 Independent Film Festival Boston, where it beat out narratives to be named Best Short Film.

The 12 finalists are competing for an Industry Award, to be decided by a jury of industry experts including "Short Term 12" director Destin Cretton, along with an Audience Award, which goes to the final entry with the most online votes.