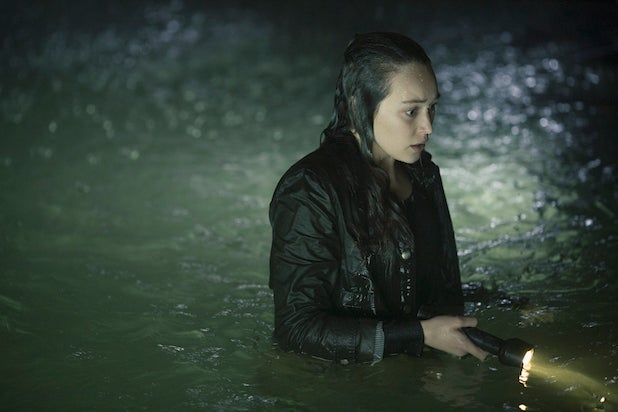 Warning: Spoilers ahead for Season 4, Episode 10 of “Fear the walking Dead”

In last night’s episode of “Fear the Walking Dead,” the storm we’ve been building up to has arrived in full force — the physical storm, and the metaphorical one that has been bubbling inside of Alicia Clark (Alycia Debnam-Carey).

“I think what was so special about this episode is that I’ve been waiting for Alicia to have some sort of relief for a long time,” Debnam-Carey told TheWrap after the episode aired. “I’ve been waiting for the opportunity to see her be able to come to terms with [the death of her family].”

And relief does come, but not until after being stuck inside a house with her nemesis, Charlie (Alexa Nisenson) — who “is symbolic of killing her entire family, very literally” — and a close brush with death.

Debnam-Carey said that while many viewers probably wanted to see her character get revenge on Charlie, the episode acted as an opportunity for Alicia to live up to her mom, Madison (Kim Dickens).

“What was so nice, I think, is that she becomes more her mother’s daughter,” Debnam-Carey said. “She really does go ‘okay, I’ve got the generosity, and some sort of moral compass still guiding me saying that we’re not enemies, and we’re not friends, but we’re kind of now just… family.'”

“I liked that… she didn’t have to have all the answers, but she could kind of find herself again,” she added.

Alicia starts the episode angry. She tells Charlie that she can’t stay in the house with her because she doesn’t want to hurt her, but if she stays in the house, she knows she will. Debnam-Carey said that while Alicia goes through an “ebb and flow” of emotions throughout the episode, if there was one moment when Alicia decides she won’t hurt Charlie, it’s when they head into the basement to ride out the storm — little do they know it’s about to flood.

“She throws her mother’s words back at Charlie, you know, that no one’s gone until they’re gone,” Debnam-Carey said.

The girls escape the basement because a zombie — which had been stuck on a tree, just out of reach, all episode — fell onto the outdoor basement hatch, breaking the lock and allowing them to escape. There’s something ironic in a monster that they’ve spent four seasons trying to outrun turns into their saving grace, Debnam-Carey said.

After that, “there’s an acceptance of, ‘this is the new world'” for Alicia, Debnam-Carey said.

As for what fans can expect from the rest of the season, Debnam-Carey teased that there will be plenty more interaction between Alicia and Charlie, who set off at the end of 410 to find the rest of the survivors after the storm.

“We can definitely expect more Alicia and Charlie dynamics,” she said, adding that some “loose ends” might be tied up, and “we get to see more fun pairings” of characters as the season continues.

“Fear the Walking Dead” airs Sundays at 9 p.m. on AMC.