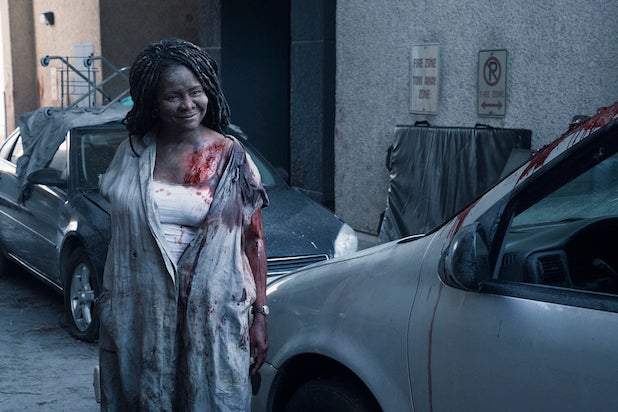 (Warning: Spoilers ahead for the “Fear the Walking Dead” Season 4 finale!)

Season 4 of “Fear the Walking Dead” has come to an end, and boy, was this season a doozy. From losing major characters like Madison [Kim Dickens] and Nick Clark [Frank Dillane], to meeting some new favorites like John Dorie [Garrett Dillahunt] and journalist Althea [Maggie Grace], showrunners Andrew Chambliss and Ian Goldberg have led fans on an emotional 16 episodes.

In the finale, we saw Morgan [Lennie James] overcame Martha [Tonya Pinkins], a villain in which Chambliss and Goldberg say Morgan saw a bit of himself.

See below for our Q&A with Chambliss and Goldberg about the Season 4 finale — from how on Earth Morgan survived all that walking to what to expect in Season 5.

TheWrap: Why did Morgan ultimately change his mind about going back to Alexandria?

Ian Goldberg: You know, I think it was sort of an accumulation of factors, but I think that the sort of final and biggest motivating factor for Morgan was his experience with Martha. We see in 416 that he comes to understand Martha in a whole new way. He’s known her over the back half of the season, he’s seen a lot of similarities between the two of them. We see that play out in this episode, but I think one of the things that really hits him, and he says this to the rest of the group after he buries Martha is, she needed help and there was no one who stopped to help her when she really needed it. And I think that that really affects Morgan and sort of recalibrates his whole approach in his thinking about Alexandria, because he realizes that there are people around here that need their help. It’s that combined with the existence of the river mill, what he knows about Polar Bear and Polar Bear’s philosophy — and Madison you know, and what Madison — who’s someone Morgan never knew but he’s very much taken to heart her philosophy, through Alicia, through June, through Strand, people who were there with her, and Morgan realizes he can affect more change by staying here by helping people in need in this area and continuing the legacy of Polar Bear, the legacy of Madison, and making a new legacy all their own that the group is all going to be part of moving forward.

Why choose to have a villain for the back half like Martha, instead of Big Bad characters like we’ve seen before?

Andrew Chambliss: I think there were a couple different reasons that kind of led us to arrive at Martha as the villain for the back half. In the first half of the season, we had had the Vultures as the villains, and they were a group, so we wanted to try to do something that felt different than that. But the thing that I think ultimately made us go the route we did with Martha was the fact that we wanted a villain who Morgan, and all the other characters, could really understand and who, in any other world, these characters could have become. You know, it’s as Morgan says to Dorie, in the scene around the camp when he’s going to sneak away at the end of the night, Morgan says, I was her. Morgan knows if he had not had the right people enter his life –if he had not had Eastman enter his life, if he had not returned to Rick and the rest of that group, if he had not met Dorie in 401 — he very well could have been in a place very similar to Martha. So it really felt like it was interesting to have someone who was a mirror image to Morgan, who was someone who didn’t want to take over the world, but someone who was just dealing with some really internal trauma that has been with them for the few years of the apocalypse.

At the end of the episode, Althea [Maggie Grace] kind of surprises everyone by offering to use her tapes as a source for finding people who need help. She tells everyone she has “layers.” What can you say about her journey since we’ve been introduced to her, and will we find out more of her backstory in Season 5?

Goldberg: Althea’s story is one that we’ve also been very excited to tell this season. One of the things that really excites us about Al as a character is she’s someone who, from the moment we met her, we saw that she had a very strong drive, a very strong reason for being, and goal in this world. She’s doing the same thing that she’s doing now that she was doing before the apocalypse, which is collecting people’s stories and getting to the truth. We’ve seen this season just how much that means to her, and how far she’s willing to go to get the story. But I think you see in episode 416, a new side to Al, a bit more vulnerability, and I think it’s rooted in what Martha says to her at the beginning of the episode when she sort of questions l’s motivation for getting these stories. And sort of, that really weighs on Al, especially when she’s, after she’s been poisoned and she’s sitting in the truck stop and she’s re-watching all those tapes of people who she interviewed, and you see what an emotional impact that has on her and the regret that she has for not doing more to help those people. That all she did was collect their story and move on. And I think that, it becomes a huge part of Al’s redemption that we see the beginnings of at the end of this season by offering up her tapes as a starting place for the rest of the group to help people in this area. But I think in Season 5, a lot of our characters are going to be seeking redemption. Al’s one of them. And the other that we’re going to see in Season 5 is that her relationship to collecting stories and to the truth itself, is going to gain in complexity, let’s just say.

She also knows who Ezekiel is — was that a callback to something before ever meeting Morgan?

Chambliss: She knows who he is, that was a callback to the interview she had with Morgan in Episode 401, when he was telling her about the places and that there’s a king and he has a pet tiger.

Sarah and Wendell have been more fun, new characters introduced this season. Will we see them in Season 5?

Chambliss: Ian and I are huge fans of Sarah and Wendell as characters, and also huge fans of Mo [Collins] and [Daryl Mitchell] as actors, so we very much want them to be part of the group going forward, and we see at the end of 416 they’re in that little convoy that drives out into the world. So you know, and the other thing is Sarah’s got some beer to brew. She wants to keep Jim’s memory alive. So I’d say people can expect to see some more of those two.

Morgan goes through so much in this episode. How does he just physically survive it?

Goldberg: And lots of determination.

Chambliss: But look, the whole kind of design of that sequence was all about showing just how far he had come. In 401, we saw him walk halfway across the country, driven to get away from people, and then it’s now that we see him with an injury in his leg, after having been in a car wreck, finding kind of the drive, the will, the fortitude to push through all that pain, all that physical discomfort, to get back to people. So it’s really about marking kind of the changes his character has taken over these past 16 episodes.

Even more reports have been coming out recently about spinoff series, maybe even movies, and how the “Walking Dead” universe will expand. Have either of you been in conversations for more spinoffs?

Chambliss: We’ve got Season 5 to make.

The Season 4 finale has a pretty feel-good ending. Did you want to give audience a happy ending or was this more to set up Season 5?

Goldberg: It was very much our intention to end up in a positive place. The whole goal that we set out with at the beginning of the season was to tell stories about characters going from dark places to a place of hope. And we were very excited to be able to tell optimistic and hopeful stories set against the backdrop of what can often be a pretty bleak world, and to show that hope can not only survive but it can thrive, and it can bring people together. And that’s what the journey of this season has been about, and that’s you know, very much going to be part of next season as well.