Reese Witherspoon, Sofia Vergara, Victoria Justice, Melissa Rauch and Eden Sher also will all be looking for laughs in new films over the next three months, as Hollywood rolls out a crush of movie comedies that are primarily aimed at, or produced by, women.

After years of largely ignoring the genre, Hollywood is betting very big on female-centric comedies this season, and it’s part of a larger trend that suggests the industry might, just might, be waking up to a largely underserved audience.

Oscar-winning actresses like Meryl Streep and Helen Hunt are getting into the act, with films like “Rikki and the Flash” and “Ride.” Even Pixar Animation’s “Inside Out,” expected to be one of the bigger family films of the season, has a young girl’s emotions as its focus.

(Read rest of story below chart)

Counting studio and independent releases, there are 12 movie comedies aimed at, and/or produced mainly by women, coming out this summer, according to Box Office Mojo. That’s more than the 10 ensemble, couple or male-centric comedies on the slate.

Applying the same formula to previous years shows that 2014 had three, and previous years were equally sparse: 2014 had three, 2013 had five, 2012 had three and in 2011 there were three. It’ s an inexact count, because the line between comedies and dramas can blur, as with Woody Allen‘s often serious hit “Blue Jasmine,” but the trend is clear.

Those numbers hardly seem a laughing matter for anyone concerned about gender equality. But if comedies can help get the ball rolling, MGM’s Motion Picture Group President Jonathan Glickman is all for it.

“Movie comedies are always going to be made by and star the funniest people in the room, and if that happens to be a woman, that’s great,” he told TheWrap. “Women don’t get priority in front of or behind the camera because ultimately, at least at MGM, we’re looking for the best person for the job.”

Also Read: 'Hot Pursuit' Director Anne Fletcher on Bad Reviews, Gender Equality in Hollywood: 'I Don't Expect Anything From Anybody'

That level field has led to the studio’s recent hiring of directors Anne Fletcher (“Hot Pursuit”), Thea Sherrock (“Me Before You) and Kimberly Pierce (“Carrie”). Glickman said he and the studio were proud of that record, but altruism wasn’t the point, nor was advancing the cause of “female movies.”

“You want to know your audience, you’d be foolish not to,” he said, “but connecting with them is what counts, and whether the director, or writer or producer is a woman will be irrelevant to most moviegoers,” Glickman said.

“Hot Pursuit,” the Reese Witherspoon-Sofia Vergara comedy that opens Friday, is backed by MGM and New Line. The film’s creative team not only has two women stars, but an entirely female creative team, with the exception of the two screenwriters.

“It creates more options and variety in the marketplace, and that’s always good for the industry,” he said. “The best part of that for this summer is that most of the movies look pretty strong.”

“I think ‘Spy’ could be the biggest of them,” said Chris Aronson, Fox’s distribution chief. To do that it will have to connect with both genders when it debuts on June 5. But he noted there are advantages to selling films aimed primarily at women.

“It’s less expensive because you’re marketing to a more narrow target group,” Aronson said, “and you can really focus the message.”

There are other advantages to female-angled films for the studios.

“Women don’t need massive explosions to get them out of the house and to the movie theaters,” said Glickman., referring to effects-driven action films and superhero sagas. Fewer booms means less bucks spent by the studios. And women are proving more inclined to becoming regular moviegoers than many of today’s tech-distracted young males.

Women and comedy has been a winning combination for Hollywood before. The screwball comedies that dominated the box office in the 1930-40s all had female protagonists, and actresses like Katherine Hepburn, Rosalind Russell, Claudette Colbert and Veronica Lake were among the brightest stars.

There were virtually no women behind the camera in those days, and things have improved a little.

Of the comedies this summer, “Pitch Perfect 2,” directed by Elizabeth Banks from Kay Cannon’s screenplay, opens a week from Friday and is expected to be a hit for Universal. Nima Nourizadeh is directed August’s action comedy “American Ultra” for Lionsgate, and Leslye Headland directed IFC Films’ “Sleeping With Other People.”

Glickman cited Feig’s raunchy 2011 hit “Bridesmaids” (photo above) as a game-changer in terms of making edgier fare popular with women, and said that the success of comediennes like Tina Fey, Amy Poehler and Kristen Wiig from TV’s “Saturday Night Live” has moved the needle as well, and not just for women.

“Funny is funny, and you hit a home run by attracting men as well as women, young and old,” Glickman said. “These women can all do that.”

The studios will be watching closely as this summer’s female comedies roll out, because several have comedy projects with women in spotlight in the works.

Sony has high hopes and franchise aspirations for its female “Ghostbusters,” which is directed by Feig and will star “Bridesmaids” alums Wiig and McCarthy. DreamWorks is developing “Las Madres,” which stars Leslie Mann who, with Cameron Diaz, scored last summer in “The Other Woman.” Rebel Wilson has enlisted for a “Private Benjamin” remake at New Line. 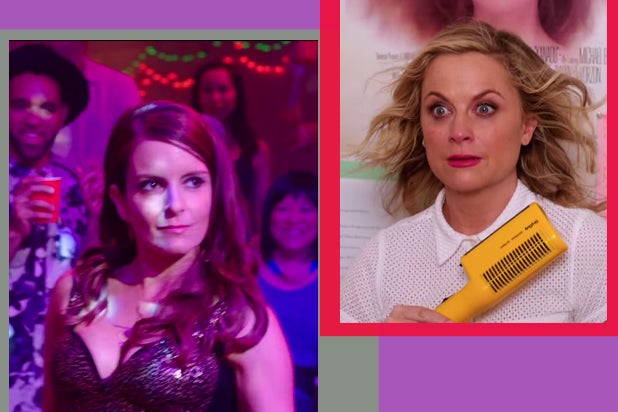 Finally, Universal clearly has plenty of confidence in “Sisters,” starring Poehler and Fey. They’re opening it on Dec. 18 — against “Star Wars: The Force Awakens.”