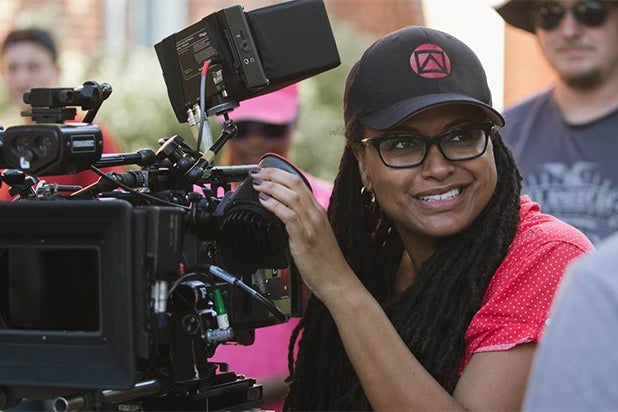 Ava Duvernay on the Set of 'Selma' - Paramount Pictures

Women continue to be far outnumbered by their male counterparts in behind the scenes jobs in Hollywood, according to a new study.

The 2014 “Celluloid Ceiling” study by San Diego State University’s Center for the Study of Women in Television and Film shows that women made up only 17% of directors, writers, executive producers, producers, editors, and cinematographers who worked on the Top 250 domestic grossing movies of the year.

The figure marks a one percent increase from 2013’s study, though 17% is the exact percentage of women who worked in those same roles back in 1998, the first year the Celluloid Ceiling study was conducted.

“The findings drive home the point that men continue to construct the vast majority of the visual and aural worlds featured in U.S. films,” said Dr. Martha Lauzen, executive director of the Center for the Study of Women in Television and Film at SDSU.

According to the study, women accounted for only 7% of all directors working on the top grossing films last year. This is down 2 percentage points from 1998 figures. In 2014, women comprised 11% of writers, 19% of executive producers, 23% of producers, 18% of editors, and 5% of cinematographers.

For the first time, the study also accounted for women working as composers, sound designers, and supervising sound editors. Women accounted for 1%, 5%, and 5% of individuals in those fields, respectively.

Women on the TV side of things don’t appear to be faring much better than their film counterparts. According to a recent DGA study conducted from 2009-2014, only 18% of first-time directors helming episodic TV projects were female.