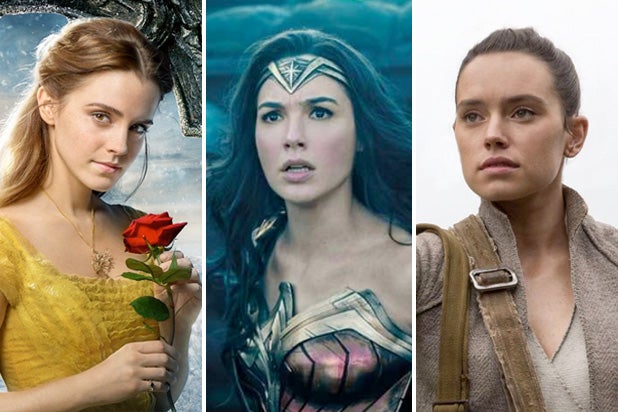 Both on and off the screen, Hollywood in 2017 was defined by its women, and the proof is in the box office charts. For the first time since 1958, the top three highest grossing domestic releases have featured female leads.

On Sunday, “Star Wars: The Last Jedi,” which stars Daisy Ridley as the ambitious, lightsaber-wielding Rey, took the top spot on the charts with $517 million. That spot had been held for much of the year by “Beauty and the Beast,” which starred Emma Watson as one of Disney’s most famous heroines, Belle. Gal Gadot held third place with “Wonder Woman,” which became the film of the summer with $412.5 million.

According to data from Box Office Madness and Box Office Mojo, which respectively log box office charts for films released before and after 1980, it has been 59 years since films fronted by women have swept the podium at the box office. In 1958, the top film of the year was “South Pacific,” the film adaptation of the Rodgers and Hammerstein musical which starred Mitzi Gaynor as a nurse stationed overseas during World War II. In second was the comedy “Auntie Mame,” which starred Rosalind Russell as the titular Manhattan socialite who takes her orphaned nephew into her whirlwind life. In third was the adaptation of Tennessee Williams’ “Cat on a Hot Tin Roof,” starring Elizabeth Taylor in the lead role as Maggie “The Cat” Pollitt.

The rise of money-making stars like Ridley and Gadot continues a trend of female-led blockbusters that have popped up this decade starting with Jennifer Lawrence in the “Hunger Games” films. That trend is expected to continue in 2018, when one of the first wide releases of the year will be Taraji P. Henson’s action-thriller Proud Mary,” in which she plays an assassin. That will continue later in the year with actresses like Natalie Portman in “Annihilation,” Alicia Vikander in “Tomb Raider,” Rosa Salazar in “Alita: Battle Angel,” and Oprah Winfrey, Reese Witherspoon and Mindy Kaling in Ava DuVernay’s “A Wrinkle in Time.”