With the NFL having kicked off and Major League Baseball in the midst of its playoffs, golf usually has a  tough time commanding attention around this time of year.

The Pro Golfers Association wasn’t behind it, but Sunday’s developments at the Presidents Cup tourney in Columbus, Ohio — where a female streaker raced across the fairway — might change all that.

If viewers paid anywhere near the attention that tour veteran and U.S. team captain Fred Couples did when the woman flashed by, it could be a ratings bonanza.

For the record, the woman wasn’t totally naked. She ran onto the fairway clad in black flats, a red g-string underwear, an American flag and what appeared to be stickers on her chest and back that read “Support Our Troops”.

As for the match, the Americans bested the international squad when Tiger Woods delivered the winning point.

Sports site SBNation was first to post the photos. The one below was Tweeted by Rhonda Dixon. 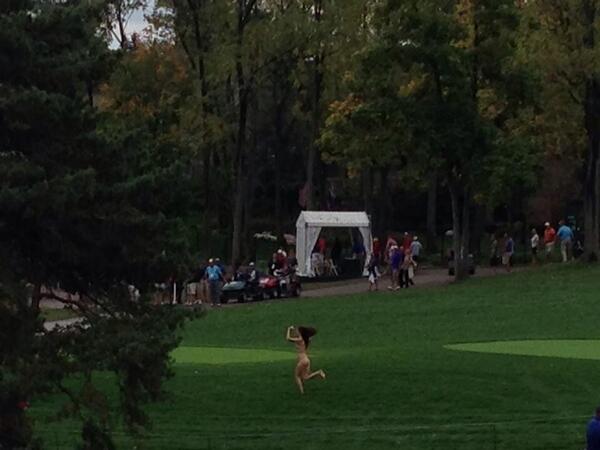